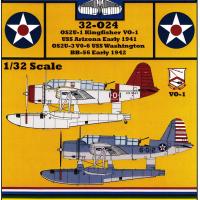 The Kingfisher was the result of a competition in the late 1930s to replace the SOC Seagull, a biplane battleship & cruiser scout plane. The new airplane was a radical improvement over the SOC in performance and maintainability. The aircraft proved so popular with both the aircrews and shipboard crews that its immediate replacement, the SO3C Seamew, was often left behind due to "maintenance issues", and the OS2U & SOC served far longer than the Bureau of Aeronautics wanted, with most of the aviation-capable ships still using them at the end of the war.

The decals provided give the builder the option to build one of several Kingfishers:

This aircraft is presented in the prewar overall aluminum paint with Orange-Yellow upper wing surfaces. This same aircraft, by September 6, 1941, was repainted in the Blue-Gray over Light Gray scheme and was photographed being recovered by USS Arizona. The same markings are provided in the kit, but the red on this sheet, is in my opinion, a much closer match to my color chips.

Use of some extra decals would allow the rest of the unit to be modeled:

This aircraft is presented in the Blue-Gray over Light Gray scheme sometime in early 1942 as it includes the red & white rudder stripes.

The decal sheet is complete enough to provide full markings for two aircraft (Blue-Grey aircraft apparently did not have the full set of the stencils applied). Printed by Microscale, the test decal went on perfectly and conformed to the plastic well. The rudder decals are slightly oversized and should wrap around the rudder leading edge (it's a separate part) and any gap would be hidden inside the hinge.

I would like to thank Wayne at Yellow-Wings Decals, and IPMS, for the opportunity to review this product.

Dedication page for contributors to this fine collection of decals