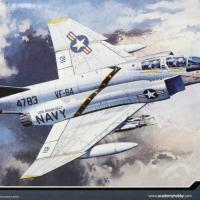 When initially opening the kit you are greeted with this note: ‘This product can be assembled without having to glue but usage of proper glue is recommended for detailed parts.’ I find these instructions intended to entice younger modelers bit comical—as this Phantom model clearly requires the aid of glues of several types. With that caveat, it is a very easy-to-assemble kit and enjoyable kit to build. In keeping with these basic instructions, I have assembled this kit using almost no filler, aside from a very small amount of Perfect Plastic Putty (applying it using a very fine tooth pick to apply the filler).

There are 18 individual sprue sections for this model kit. Academy continues to use of three basic colors in the moulded kit parts (gray, black and white), including Academy’s now familiar to molding the entire top of the fuselage as a single piece, thereby avoiding the dreaded centerline issue. Other than this small issue, the kit’s fit and construction is pretty straight forward. There is some indication of the underlying color of the major parts or at least some of the component parts, though for the life of me, I was unable to determine their intended scheme intended.

Dimensionally I believe the Academy kit is correct in each major measurements, length, with the kit measuring approximately 58’6”, width is approximately 38’6” and height at about 16’6.” Additionally, since the F-4J had larger sized wheels, the upper wing surface clearly demonstrates this wing bulge on each size. And the stabilators are slotted which is also clearly shown on top of each of the stabilators.

While I do not use most of the color references, it does provide for using Humbrol, GSI Creos (Aqueous Hobbycolor and Mr. Color), Lifecolor, Testors/Model Master (enamel and acryl), Revell (enamel and acryl) and Vallejo (both Model Color and Air). In my construction, I basically used Model Master for primary fuselage colors and some Vallejo for interior and exterior details. One of the few exceptions I found was in the interior color of the speed brakes. The kit instructions call of these to be painted black and all of my color references and photos show these painted red. Though I have photos of VF-84 aircraft I missed the opportunity to catch this color detail, leading me to paint mine red.

In my humble opinion the surface detailing provided is some of the best I’ve seen; this is especially evident in the splitter ramps and the overall jet intake areas.

The weapons provide for several options including Mk 82 bombs, AIM-7 sparrows and AIM-9 sidewinders. In the case of the AIM-7 and AIM-9 missiles, both include the details I have seen for these weapons in this scale, including the very small raised ridge line on the sparrows and even smaller circular ridge lines around the missile and the small wind generator wheels (rollerons) along tail control surfaces.

Both the main gear and nose supports are well done and appear to be accurate strong enough to support the model kit when completed.

Another small grip is that the attachment pins are all too large for their intended holes: case in point the mounting prongs, a majority of which clearly don’t mate to their intended locations. My favored method of dealing with this aspect of the kit’s basic engineering is to predrill the with a larger diameter drill bit. The missile and bomb attachment points also require some tricky manipulation as the slots are clearly not engineered to accept the intended parts.

As good as the small missiles are the bombs provided offer little in the way of actual ordnance (either in the basic shape or the bombs themselves, fuses or the various fin shapes. As disappointing as the bomb shapes are, the missiles and marking decals are excellent! The sparrow missiles fit and are much easier to attach.

One small hitch is that a visible seam line down the center of the canopy is molded into the kit. While this may be removed by light sanding and polishing, it stands out as a place where the engineers who deigned this kit erred, and not in a good way.

The interior detail is almost totally lacking with only the basic representation of Martin Baker seats provided. There are no little pilot and NFO figures provided. For those of you wishing to build a very accurate interior, you’ll have to resort to one of the numerous interiors and ejection seats available.

One of the few hints about future releases the small holes atop the upper intake where the AN/ALQ-126 antennae will be mounted (on the F-4N kit). In this build these four locating hole require filling and sanding. And the top of the vertical stabilizer has to be glued into place for the model of the F-4J, providing a further hint toward added variations coming later.

In the underwing areas, there are several added antenna including those connected to those shown under the intakes, just to the rear of the main gear and the nose. The kit also contains the bridle hooks as these were some of the last carrier operated aircraft to employ the use of hook and bridle connectors for catapult launched aircraft (as the nose tow bar was used subsequently).

Possibly a sign of my aging, I found that I needed to look at drawings very carefully – more than once in my experience. While the illustrators and artists who prepared the molds and drawings clearly seemed to have caught most of these small nuances. As in wood working, check the fit and later relationship to other nearby parts, then check it again, and only as a last resort, glue it together.

The decals for the Academy deserve special mention in my opinion. It provides for beautiful Cartograf decals for two aircraft aboard the USS Franklin D. Roosevelt, with CVW-6, during one of the FDR’s ‘final cruises’ and many small details for the basic aircraft, bombs and missiles. These Cartograf decals are beautiful (again, my opinion), providing decals for two aircraft from CVW-6 and include lots of very small stenciling details which I had not expected in this 72nd scale kit.

I encountered no errors or omissions in the Academy instruction sheets, though I will admit two parts were never located as I carefully reviewed them.

This kit is a winner -- in almost every sense of the word. It provides the modeler with a very accurate model of one of the Navy’s most important and significant well-known aircraft of the Vietnam war efforts. My overall quality rating is 8 (on my self-invented rating scale of 10).

I really enjoyed this modeling experience and am impressed with much of this kits fit, detail and finish. It’s a real value overall and I am planning to build at least one more in the near future. Buy it and build it, I think you’ll be pleased with your finished efforts and modeled an important aspect of the Navy’s Vietnam war. From this reviewer’s viewpoint, there’s nothing really to compare it against. Accurate’s rendition is what you want to get your hands on right away. It’s really light years ahead of the other kit most other kits in this scale.

Thanks to Model Rectifier Corporation (MRC) and IPMS-USA for the opportunity to review this great new offering from Academy.