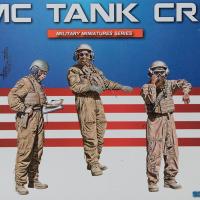 When I model military vehicles, I like to have a figure or two with the vehicle to give it more animation and scale. If you like to model modern US armor, there have been limited options for tanker figures in the most modern of US military uniforms. Mostly, suitable figures are found in resin, but injection molded options are few. To be fair to the manufacturers, the US military has kept changing uniforms during its 15 years of conflict in the Middle East and Afghanistan. When figures are available they tend to be US Army, which wears a different uniform than the US Marine Corps. MiniArt to the rescue.

With this MiniArt release, the Marine Corps finally gets their due. There are five figures in this set, 4 tankers, and a field officer, perhaps Infantry, to accompany a vehicle. I work as a defense consultant on site at a US Navy command which includes USMC officers. As luck would have it, one of the officers is in the armor branch. So I had a leg up for this review and discussed the kit figures with him. The “infantry officer” is in the latest USMC camouflage uniform. The tankers are a mixed bag, so to speak. Two of the tankers, the tank commander studying the map and the tanker in the NOMEX gloves, are in the new USMC tanker coveralls which have been out for a while. The other two tankers, the one talking in the intercom and the one looking through binoculars are actually wearing flights suits. Before the new coveralls, Marine tankers wore US Navy/Marine Corps flights suits – both tan and green and even with the new coveralls, tankers can still be found in flight suits. MiniArt has done a great job capturing this detail.

The molding of the figures is of the highest quality and the detail rivals that of resin figures. The fit and sag of the uniforms is amazing as is the detail on the ballistic vests. The hard shell of the tanker helmet is provided as a separate piece allowing for greater detail around the head. Two of the figures even come with the internal communication system (ICS) connecting cable as a separately molded part. My only criticism is the molding of the AR-15. Because a softer plastic is used, the gun was not as crisp as one offered by other companies. The kit part does appropriately reflect a modern M-4 version with rails and a sight.

Assembly was pretty straightforward, though there are no instructions provided, just the artwork with parts callouts on the back of the box. Since it was hard to discern exactly where pieces were to go in assembly, I referred to front and back pics of the assembled figures provided by MiniArt on line as part of their release announcement; I also found pictures of USMC tankers on line. Very little clean-up was required and the fit of the parts was very good. I used liquid cement throughout. Once I had the figures assembled and while the joints of the arms were still curing, I attached the accessories into or under their hands, in order to achieve a natural pose. I replaced the M-4 with an M-16A3 from a Tamiya accessory set, adding the telescopic sight to the receiver section of the Tamiya M-16. On some of the figures, I used a little CA to fill minor gapping at the shoulders as I moved arms. I left off some of the small pouches for a later time since I am not sure how I will pose the figures around my vehicle models. A test fit into some vehicle hatches implied a tight fit without the pouches.

While the box art focuses on desert camouflaged Marines, my tanker colleague told me it was not uncommon to see Marines in green flight suits in the desert, as well as tan flight suits – depends on what they were issued and have available! The green flight suits tend to fade with repeated washing so they do not stand out that much in the desert. I painted one figure for this review and opted to put him in a green flight suit. For the sake of review, this painted figure has only the base colors applied so you can see what the figure looks like with color. I used the following Model Master enamel colors:

The only tricky part of painting these figures will be the desert digital camouflage of the soldier’s uniform. Patience and a very fine brush will do, and MiniArt provides a guide for duplicating this pattern. However, there are aftermarket decal sheets you can use to wrap the figure in a realistic pattern.

I really like this set both in subject and the realism of the portrayal. The attention to detail is first rate. Plus the price is very attractive compared to resin cast figures. I highly recommended this set to anyone wanting to add modern Marines to their vehicles. For modelers of the modern US Army, MiniArt has a set of tankers not far behind.

Thanks to Mini-Art for producing this set of figures and the IPMS-USA for allowing me the chance to review it.

Back of box with painting guide