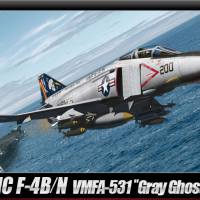 Extreme appreciation to Academy and their USA distributor Model Rectifier Corporation for sending out this new version of their venerable F-4B/N kit, and the usual cheerleading wave of thanks to the IPMS USA leadership for sending it to me.

This kit sat a while in the link. I’ve built two of the Academy F-4’s, a “B” and a “J”, and had impressive results from even MY feeble modeling skills. Kits like this take a bit of time to construct, but are well worth it in the end.

What’s in the box are the same parts from the previous Academy Rhinos, with the exception of single color gray plastic, with no white, black, and gray parts. Yes, also clear parts. The decal sheet is new, for two plain-Jane gull gray over white F-4B’s from the Vietnam era for VMFA 531, The “Gray Ghosts”. The last version is the overall Light Gull Gray scheme with a Dark blue fin and markings. Yep, I went for some original color!

Kit assembly is not tricky, just somewhat unconventional. First up is the fuselage; one-piece molding, with alternate parts for the refueling boom receptacle or flush skin, to be used with the naval probe and drogue refueling system. This is offered up to the wing and lower forward fuselage and aft bare-metal titanium skin as seen on the actual aircraft; a method used by Tamiya on their then-groundbreaking 1/32 F-4C/D.

The cockpit is well detailed and responds to drybrush methods. When complete there is nothing to add with the exception of the missing harnesses. If you use the included pilot and RIO, the only real harness visible will be the two straps holding the parachute container together on each side of the headrest.

The J-79 engines are next up; both augmentor tubes are one part items, to which you attach the afterburner nozzles. These have correct depth, from the flameholder to the actual nozzle, and are detailed inside and outside; the kit contains the early short petal nozzles for the early F-4B/C/D/N, and also the long-petal nozzles for the F-4E/J/S. I painted the burner chamber light Luftwaffe green from Tamiya, which approximates the color I remember, then heavily weathered them with flat black and various brown pastels to mimic the “sooty” appearance of the old beasts. The green barely shows through and I’m pleased with the result.

The intake parts on this kit, like all Phantoms, are a bit of a chore, BUT when you are finished out of the box they look great; check the pictures to see. Painted white first, then assembled, the parts all fit tight and properly. The actual intake outer shell fits better than most other kits; seems a bit “dangly” during construction, but it only required a few swipes with 240 then 400 to clean up. I shot some primer over the seam and it did not look like an afterthought.

If you take your time and use liquid cement, you will be able to assemble the upper and lower fuselage/wings without a seam. Take extreme care with the burner cans, and you won’t have to re-paint them. The vertical fin tip just slips onto place on the fin tip; you’ll want to make sure here to use the correct version as there are three different fin tips with their associated warning antennae.

This kit has a minor bit of notoriety in the fact the wheel wells are a bit complex. By the multiple-part engineering Academy have provided a bit wheel well worthy of extra work in that the detail level is fully 3-D in effect. This means you have to be a bit careful in assembly. My recommendation is to use liquid cement, tack all the parts together and place in the wing where they belong, then run more cement along the seams and wing attachments to ensure alignment.

It worked for me.

With the wings cement hardened up, one can go to work on the rest of the required additions such as outer wing tips, flaps and ailerons. The leading edge cannot be displayed down, requiring major surgery for a “launch” diorama. The stabilizers slot into their sockets with no fuss (I recommend carefully-applied liquid cement here for strength).

On F-4’s I like to attach the center canopy brace with it’s forward viewing side windows and forward windscreen. The brace needed just a touch of the sanding stick, and it was blended into the fuselage.

I also installed the wing pylons; the centerline tank was left off until after painting, to ensure I didn’t miss anything with the spray can.

Painting the model involved simply masking the clear bits and shoot Tamiya gray primer to ensure I had nothing requiring filler or plastic “ooze” sanding stick attention. Polish the primer to a smooth surface overall, then spray the tail bare metal heat resistant areas Tamiya Bare metal, let cure overnight and mask, then shoot the black anti-glare panel on the nose and wing/fuselage walkways, and mask when dry (Duplicolor flat black in my case). There is a decal for these on the sheet if you prefer; I find those don’t work for me usually. Read on for the walkways.

The wing and fuselage walkways were a conundrum; the kit provides gray walkways, but the actual aircraft had black walkways. I made kabuki masks by taping the walkway decals over wide Tamiya tape fixed to my cutting pad; then a new #11 blade was used to cut around the outline, through to the tape. The key is to make sure you have a sharp blade and firm finger pressure on the decal to hold it in place. Remove the decal, then the mask. Carefully install on the model; then you can paint as required.

I actually brush painted the vertical fin with two coats of Vallejo Prussian blue; once cured it had leveled out nicely. Mask the fin, then spray the whole model top and bottom with Testors gull gray. Once cured, brush paint the Wheel wells were next with Vallejo white.

The next chore is to spend some quality time with the landing gear. These are multiple-part assemblies and worth taking a bit of time to ensure correct angles, etc. more brush painting with white…

The tires are split with no wheels; Academy have shown their hand by providing all the available wheel configurations for the various marks of F-4 coming from them, so make sure you use the correct thin-profile wheels for the high-pressure tires of the F-4B. The nice thing is if you are careful you can paint the wheels and tires separately then use thin cement to get it all together. Use of liberal amounts of cement while holding the parts together will result in disaster with capillary action, so sparing use is the key. I used gel superglue to attach them to the landing gear, which provides solid, secure attachment without having to prop the model up and wait for solvent-based cements to cure.

I had previously painted the gear doors and speed brakes on the runners; white inside, gull gray outside. Once removed from the runner, a bit of light sanding stick, then out comes the sharpie marker, held at 90 degrees to the part, to paint the door warning edges. The speed brakes and their wells/actuators were painted flat red, then attached with gel superglue. The gear doors were attached next, and the underside was done.

My favorite part: DECALS! This Cartograf sheet is a marvel, and it was a shame to cut it up, but “I MUST” so it ‘twas. My technique is to do the fin and outside areas first including all major decals like national insignia and “MARINES” markings. Once they are in place, I’ll wait overnight before working the stencils. This was, overall, a three-session job, as there are a LOT of the little buggers on this kit.

Final shot of gloss, then airbrush thinned sooty black under the tail including the stabilizers. Next up was a flat coat to provide “tooth” for the pastel weathering to hold on to. I did some pastel streaking on the underside and hinge points, and followed this with some light hydraulic puddling, etc. in the wheel wells. I need to go back and do a bit more; after a cruise these beasts were filthy! More flat coat…

Final additions were the MER bomb racks and the bombs; these fit together like the rest of the kit; it’s amazing how accurate the parts are on kits these days. Clean up seams, impale the bombs on your favorite toothpick holders, and paint Olive drab. Glosscoat, then decal, followed by solvaset to help them settle in. I find Cartograf decals to be a bit reluctant to settle these days, particulalrly with multiple color decals, so use the liquid cement technique carefully If required. Touch up any misaligned decals as required.

Sidewinders are AIM-9D, so it was paint whited, black seeker head and fins, with yellow “Live armament” and black motor bands. I used the trusty silver sharpie to paint the attachment bands.. Some pictures I found showed only two sidewinders being carried on outboard rails, so that’s how we ran this show.

The shoulder bomb racks should have the spacer installed on the bottom of the pylon; I forgot, so there was a bit of interference with the Sidewinder missile fins. Oh well.

The bombs and missiles were cemented to the racks and rails, and it was time to install the open canopies and their actuating arms, and the red refueling probe and it’s linkages and door, and we are done!

I had a very enjoyable build with this Academy product, and I was more than pleased to review this model. It can hold its own on a competition level, and I speak for IPMS when I say once again thanks to MRC for their support by sending this kit to us.