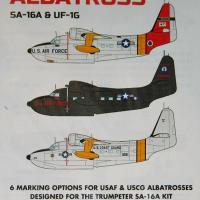 Thanks very much to our friends at Caracal decals for providing us this sheet and to the reviewer corps leadership and team who continue to keep me straight on my review efforts!

DECALS! One of the reasons I really enjoy plastic modeling. The decals usually mean “We’re almost done”; the final markings are what I look forward to in the build. (anyone out there willing to confess to really enjoying filling and sanding seams?).

Caracal are a relatively new company; they jumped in early, knew the market, and are delivering in a big way. The vast majority of their sheets sell out fast; if you want them, you need to preorder. On their website you can see what is coming, and plan accordingly.

On to their new 1/48 SU-16A sheet. The subject decal sheet has markings for several different aircraft; four USAF, (three are standard Aluminum with Yellow bands Rescue aircraft, one has yellow bands with red arctic markings, one overall black Air National Guard bird from Korea, and one in overall Aluminum Coast Guard livery). All are for the Trumpeter SU-16 “A” models with the short, slot-equipped wing (The SU-16”B” had wing extensions added mid-span at the production break on each side, with the leading-edge slots filled in and the outboard leading edge cambered down on the airfoil; there are other differences too, but I’ll leave that for your own research). For the AMS among us I recommend the Shiffer book on the Albatross by Wayne Mutza for reference to detail; interior and exterior shots are provided in the book, which greatly facilitates the build.

Some special notes on the decal sheet: the gold on the Coast Guard crest is just that; not something that is seen frequently on decals. Registration and saturation is perfect, no flaws! And we don’t have to fight with separate red stripes on the U.S. Insignia. That’s a major plus in my world.

Painting and preparation are paramount on this kit. BTW, with the exception of the mis-shapen windscreen, the Trumpeter SA-16 is s superlative-filled kit. The plastic fits great, engines are well-detailed, as are the wheel wells and interior of the hull. I used an Alleycat productions replacement resin nose and canopy section; it was a lot of work to incorporate but gave the finished kit a “correct” look.

Back to the decals: Although I am drawn to the overall black bird with red markings, I opted for the Arctic scheme. This is what I call a “multi-company effort” sheet; there are three sheets; two, sheet “A” and “B” are by Cartograf, which had the majority of the markings on them, with great registration and color saturation. Sheet “C” was printed by Microscale, and had the gray wing walks and black striping for use around the rescue bands.

In a nutshell, these decals worked perfectly! No silvering over a glosscoat, and both Microscale and Cartograf decals were durable, color saturated, and stayed where I put them (but could be moved as necessary without balling up or tearing!)

The only areas I had of concern were “builder induced”; a scratch on the upper gray walkway requires a bit of paint matching; I tried Vallejo Sea gray but that was not it; I’ll try dark compass ghost gray later. I misinterpreted where the tail yellow band began and ended (it starts just behind the aft porthole round windows, and ends ¾” aft of that line). That means the two vents on the upper aft fuselage are actually located where the aft black bands go. When I do this one again, I will leave the vents off until after the black stripes are placed so there is not so much drama on my part in trying to get decals over the vents. My mis-measuring meant I had to re-do the yellow fuselage stripe. Grrr…

Two other notes: The long black stripe decals are for the fuselage, and the four short ones are for the wings. Also, when painting the yellow wing markings, I did not notice until after I had pulled the masking that the demarcation between the yellow and red was about one inch too far inboard on my masking job. I thought the yellow stopped at the forward slot in the wing, but it appears I was off a bit. The drawing does reference the aft fuselage stripe as being ¾”, but nothing is stated about the wing. Just check your references…. I went ahead and left it as is, due to time constraints.

Final verdict: 10 of 10. Caracal are commended for providing sheets for subjects that need upgrading (the 1/48 F-101 sheets comes to mind; they are excellent as well) and I look forward to more great decals from this group. Thanks again for providing us these great sheets, and thanks to IPMS USA for the opportunity to excel once again!