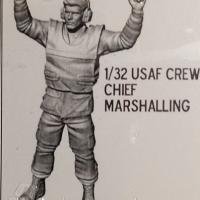 I chose to represent myself as an active duty crew chief with this kit. The uniform is molded as a modern USAF uniform, although it is easily backdated to the Battle Dress Uniform (BDU) that was the standard during my time in the USAF. An addition to the figure for marshaling large aircraft would be to add orange paddles to the hands.

My thanks to VideoAviation.com for the review kit and to IPMSUSA for letting me review it.