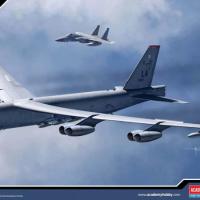 The B-52 is probably one of the most iconic aircraft of all times and the longest serving aircraft in the US Air Force inventory. Designed to carry nuclear weapons during the cold war as a nuclear deterrent, the capabilities have changed since it took to the skies. The first flight of a B-52 was in April 1952 which the cockpit on the first two aircraft was a tandem arrangement similar to the B-47. That design was changed to a conventional side by side seating arrangement on all production aircraft. The first B-52H made its maiden flight in July 1960 and the final B-52H manufactured in October 1962 ending after an eight year production run. The most obvious difference on the B-52H is use of turbofan engines (TF-33) instead of the J-57 turbojet. Upgrades continue to bring new life to the airframe and capabilities but the youngest airframe is 59 years old at the time of this review. All of the aircrew that currently fly the B-52 are younger than the aircraft which is remarkable. They say that when they retire the B-1 and B-2, they will send a B-52 to pick up the pilots.

Packed in a sturdy box are nine sprues (4 duplicates) window masks and a comprehensive decal sheet covering three subjects. The aircraft configuration and decals are all for aircraft during 2018. There are two radome choices, one with AN/ALT-28 ECM fairing and one without but only one version called (without ECM fairing) out in the instructions. There are options for gear up or down, bomb bay open or closed with a separate single piece bomb bay door is used for closed bomb bay. The landing gear reinforcements for inside the fuselage and single piece doors on the outrigger wheels and main gear doors for wheels up configuration are included. There are two lower fuselage sections that indicate future kit releases, possible the B-52G. For the canopy section, the clear section goes beyond the windows which is nice when filling seams. There is basically zero “flash” on my sample and detail is remarkable. It is really nice on the engines where the entire forward front inlet/fan bypass section is made of two parts but is assembled and cleaned up separately from the aft section which makes painting and assembly very easy. Paint index lists seven different manufacturers, Humbrol, GSI Creos, Lifecolor, Testors/Modelmaster, Revell, Vallejo and AK are the paint companies listed including federal standard numbers where applicable.

One of the first decisions you will need to make is if your will build will be wheel up or wheels down. Another decision is if your bomb bay will be open. I was a little confused with the term “open” and “closed” for the gear position but that is the pilot in me struggling with the semantics, it is a non issue. I spent probably a third of the time on the build painting the wheel bays and bomb bay. The amount of detail is astounding in this scale and Academy gets high marks here. A note on color for the bomb bay and wheel bays, all the reference photos I have seen, the color is a light gray and not white as indicated in the instructions. I used a couple variations of gray from FS 16440 and 16473 but please check your references and choose accordingly. Landing gear is correctly labeled as white. If you decide to put bombs in the bomb bay, you may want to follow the instructions and add them at this time. I decided to add them after at the end of the build. It was not impossible to add them but it was very difficult.

Continuing on the internal components, the cockpit is fairly simple and convincing. There are not and details of instrument faces or decals for instruments and I simply hand painted flight displays which may never be seen. Painting notes show everything all one color so back to your references on adding a little color, especially red on the seats which will be seen. Before sealing up the fuselage, do not forget to add a few small antennas and other bumps that protrude from the fuselage. There is a pair of antennas on top and just ahead of the rudder. I cut the antennas off and installed the base part so I would reduce the risk of damaging the antennas during the build. That option worked out well since it left a small pocket to reattach the antennas. Now you can assemble the fuselage but one thing to check if your gear will be extended. Make sure the landing gear is level and the best reference point is the upper part of the gear strut relative to the base of the gear bay opening. Just a small variation or gap will make your B-52 tilt to one side and will be noticeable since the outrigger wheels will not touch. The wing appears to be in a “unrefueled” condition which someone may want to consider adding a little more “sag” to the wings.

Assembling the wings are really simple but as just mentioned, if you want to add some droop, now may the best time to do this. The flaps are separate but internal detail does not exist and no way to put the flaps in an extended position. Hopefully aftermarket companies will come to the rescue here. Step 12 I skipped for a later time which is installing the outrigger landing gear doors with the gear extended. If you build yours wheels up, installing the gear doors, this is a good time to do that.

The engine assemblies are very nice on this kit and from other builds I have made, the best I have seen to date in this scale. The engineering and molding is very well laid out which makes assembly and painting easy. You will need to note each assembly since there will be four unique engine pods and note where each one will go. I decided to install the engine pylon on the wing instead of attaching it to the engine first but either way should work out fine. Where Academy gets very high marks is how the engine pod assemblies are laid out. The forward section containing the inlet portion and bypass fan is made of two parts and does not include the fan faces. The molding method eliminates any seams down the side of the pods that you see on most B-52H models. The core engine parts that reside inside the pods are molded separately which allows you to paint the fan bladed and then insert that portion into the forward section. The aft portion is similar in design. There are a couple things that do need to be noted on the engine pod assemblies. First is the instructions do not mention part number F8 which helps align the fan portion of the engine to the aft compressor section. This part is key to aligning the engine halves. The second issue, which may not be an issue to some is the “blow in” doors on the inlet are molded in an open or blown in position. On the real aircraft, these doors remain closed unless the engines are at high power settings like takeoff. If the aircraft is on the ground with engines at idle or off, the doors will remain closed. When these doors are closed, they nearly vanish from view so if you build you aircraft “in flight” the doors open will not be an issue. On this build, I filled the recesses where the doors are and with some masking, tried to simulate where the doors are but when everything was completed, they are barely noticeable.

Next in the instructions are the two underwing stores which you get the choice of “dumb bombs” or JDAM bombs. The detail is very nice on these pylons and on the bombs, especially in this scale. Make your decision on what you go with since each choice shares half of a pylon but the other half is different between the dumb bomb and JDAM. I did find it odd that the middle JDAM is molded on the pylon sprue for which I removed those so I could paint the bombs separately then reattached later. Just like the internal fuselage items, ordinance assembly and painting will consume a lot of the build time. The remaining items under the wing are the auxiliary fuel tanks and SNIPER pod. There is a LANTIRN pod on the same sprue but not listed in the instructions.

The last little details to add are a choice of sensors (FLIR & LLTV) that show the sensor in a stowed position or active position. Horizontal stabilizer assembly and installation is simple without any issues. Additions of antennas in the aft portion were added after all the fuselage seams and wings were attached to avoid damage during the seam filling process. The remaining antennas stayed off until after painting of the entire model. Finally, the cockpit section was sealed up with the upper portion of the radome and canopy. The sprues include two upper radome choices, one with a “bump” commonly seen on B-52G and H aircraft and one without the “bump”. The instructions call out for the radome that does not have the ECM “bump” since this subject represents a configuration after upgrades which remove that ECM feature. The canopy clear section extends well past the window section which allows you to fill seams and not damage the clear windows. Academy includes masks which fit perfectly and are a must on this build.

Paint is fairly simple since the entire airframe is a single color with a few small areas (antennas and engine exhaust). Panel line was added and ready for decals. The decals are very nice, crisp detail and not out of register. There are plenty of stencils to add so be prepared. Walkway decals are used on the horizontal stabilizer and is a two part decal. They are a little challenging since there is not much excess carrier film but nice not having a large clear portion that may silver. I did have difficulty with the decals around the FLIR & LLTV on the nose. The instructions do show a closeup detail on adding the decals but it did not all go on as planned. It could be just me but be aware of a possible challenge here. Last paint step is a flat clear coat to seal everything in

After everything is painted & decals added, it is time to put the little pieces back on. The antennas removed earlier in the assembly, landing gear doors and external stores.

My last B-52 build (1/144 scale) was a few years ago long before Academy released this new tool B-52H. Compared to that build, this release from Academy is far superior to that build. This B-52H has more than enough detail packed into a small package and I expect to see tables full at contests of this kit. I also expect to see aftermarket companies releasing a few upgrades to enhance an already great kit.

Many thanks to MRC for providing this kit to IPMS for review.

FB Not Called Out

F8 Not Called out

Outrigger Off the Ground