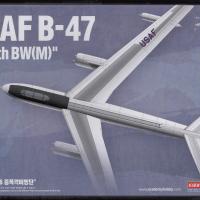 The B-47 was the first swept-wing jet bomber in the US Air Force’s inventory, serving the USAF from 1951 to 1969. The US Navy flew some EB-47Es until 1977. Development began in 1943, and the design changed several times until Boeing came up with a 6-jet aircraft with the engines in pods under the wings. Because of the size of the engine pods, the main landing gear was set up as a “bicycle”, with 2 main gear under the fuselage, and smaller outriggers under the engine pods. With this setup, the B-47 could not rotate the nose on takeoff. The main gear was set so the aircraft sat at optimum takeoff angle at all times. The B-47 was subsonic, but extremely fast for a 1950s, setting a number of time and distance records, with speeds around 600 miles per hour.

Another personal note: When I was about 10 years old, my Uncle Leroy took me and my father to Lincoln AFB in Lincoln Nebraska. This was also part of the civilian airport, and we got to watch a B-47 do touch and goes from the top of the terminal building. I was impressed.

The Academy B-47 is a rework of the 2002 Hobbycraft kit. As such, it is pretty much up to modern standards, with recessed panel lines and decent fit. But what makes this kit a winner is that Academy has done a lot of work on the molds, and added a bunch of parts. The older kits offered a B-47B, or another kit of the B-47E, or a kit of the RB-47. All of those versions are available in this one box.

You can build your choice of one of 11 different B-47s from this kit. With various noses, wing tips, underwing tanks, fuselage additions, engine mounts and markings, you can do any of these: 2 B-47Bs, 4 Bs upgraded to Es, 3 B-47Es or 2 RB-47Hs.

The instructions are pretty precise, but you have to decide which option you want to build before you get past the cockpit interior. I decided to do OPTION 1, a B-47B-40-BW from MacDill AFB Florida in the early 1950s. So in Step one I had to cut rectangular holes in the fuselage sides for the JATOs. These were helped by the fact that there are guide slots cut in the fuselage halves as cutting guides. After cutting out the holes and evening up the sides with a sanding stick, I was gratified to discover that the JATO units fit the holes very nicely. No putty required, which is unusual for me.

In step two, it was necessary to open three holes in the bottom of each wing for the external fuel tanks. Again, there were guides, and the holes lined up nicely with the pins on the tank pylons. The wings and horizontal stabilizers went on cleanly. I used no putty on these assemblies. Super nice fit.

I also assembled the engine pods, but left the pylons off for painting.

OK, one of the reasons I chose this particular Stratojet was that the paint job was pretty simple. I painted the whole aircraft Model Master Aluminum Metalizer, and coated it with Future. I also painted the engine pods, the landing gear doors, the gear struts, the external tanks and the wheel hubs. I masked the engines and painted the rear half with Burnt Metal. I painted the tires black, and did the canopy. There are decals for the canopy, but I’m not that good with them.

This is the second area where Academy shines. The decals are by Cartograf, and they are spectacularly good. I got some help with those long straight decals on the tops of the wings, but after that I did all of the rest by myself. The long straight decal down the fuselage top and the black anti-glare panel around the cockpit went on beautifully. I had some trouble with the fine red lines around the JATO units, but got them pretty well under control. The rest of the markings were pretty easy to get on too, except I didn’t get the P on one side of the tail perfectly square. Oh, well.

Once I had the decals on and coated, I finished the assembly. I leave most of the external parts off my models because of a tendency to break the small stuff while I apply decals. So now it was time to put on the canopy, mount the engines, install the landing gear, and put on the gear doors.

Highly recommended. There are so many variants that can be built from this kit that I am seriously considering going out and buying a couple more. The kit parts fit well, the decals are outstanding, and it’s an interesting subject. I’m going to have to find a copy of Jimmy Stewart in “Strategic Air Command” to see the B-47s again.

Many thanks to Academy, MRC and IPMS USA for allowing me to build a great kit that brought back some good memories.