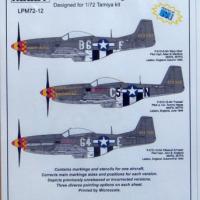 LPS Hobby is a Brazilian company that has released three new 1:72 scale P-51D decal sets. One of the latest, set #LPM 72-12, provides decals to finish three different Mustangs from the 357FG that received field-applied camouflage while based in the UK during 1944. Because of this, there is evidence the paints that were used were sourced from British stocks, making these aircraft appear more unique than other USAAF aircraft that were delivered in standard Olive Green over Neutral Gray. That instructions include that information with recommended RAF colors (or ‘colours’ as the case may be).

The set includes a rather small decal sheet that includes all of the unique markings for each aircraft and enough national insignias and stencil data for one aircraft. Therefore, it will be necessary to use national insignia and data markings from kit decals sheets to finish more than one 357FG aircraft from this set.

The decals are printed very crisply in vivid, well-registered, opaque colors by Microscale. They are printed on thin film and, as with other decals manufactured by Microscale, should respond well to mild setting solutions. However, it is recommend that they be applied by ‘floating’ them in place with enough water to keep them from bonding to the surface before they are properly positioned.

The three aircraft are:

This decal set is highly recommended to any 1/72 model builder who would like to finish one, two or three USAAF P-51Ds in something other than a natural metal finish. My thanks to LPS Hobby for providing the product sample and IPMS/USA for the opportunity to review it.