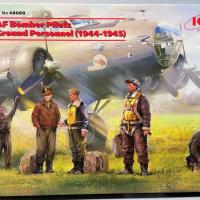 ICM’s new figure kit “USAAF Bomber Pilots and Ground Personnel (1944-1945)” includes three aircrew figures, two ground crew figures, and two flight bags. The colorful box lid (photo-1) is flimsy but covers a sturdy hinged cardboard inner box (photo-2). The packaging won’t get squashed if the box winds up underneath all the other kits you told yourself you wouldn’t buy until you finished something you already have. The included instruction sheet is printed in color with a parts map and paint list on one side (photo-3), and assembly and painting instructions on the other (photo-4). The paint list includes color recommendations for ICM, Revell, and Tamiya brand paints. The painting instructions are somewhat simplified and since I didn’t have the recommended brands of paint, I used the artwork on the box lid as my painting guide. All the parts are included on a single sprue of light gray plastic (photos-5 and 6). The sprue is packaged in a re-sealable plastic bag, handy for keeping loose parts from wandering off.

There were no sink marks or flash on any parts. Trimming of sprue gates and scraping of parting lines is the only clean-up needed. All the figures seem well proportioned and have natural-looking poses. The details are well defined and sharp, even tiny details like zippers and uniform insignia are depicted. A modeler without much experience painting figures could get reasonable results with just washes and dry-brushing over the base colors. The figures assemble easily with good fit. The only fit issue I found was with the kneeling figure’s left arm. I couldn’t get his hand to rest on his leg without a gap opening at the shoulder. I decided to glue the arm with no gap at the shoulder and use wadded-up foil to depict a rag in the gap between his leg and hand (photo-7). This fit issue might have been avoided if I had not let the glue set between the legs and torso before I attempted to fit the arms. The officer with his hands in his pockets has a visored hat that is depicted in its as-issued state (photo-8). It would have been nice if ICM had depicted this with the sides crunched in. When used by aircrew, these hats developed a crushed look from the wearing of headsets.

I really enjoyed building and painting these figures and can recommend them without reservation to anyone who wants to add a little interest to their USAAF builds (photos 9-13). I am sincerely thankful to both ICM and IPMS for providing the opportunity to build and paint these figures.