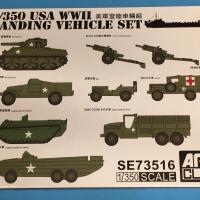 In conjunction with their release of the U.S. LST-1 Class of ships, AFV Club has also release a box of 1/350 WWII military vehicles to populate the deck and well deck of the ship. Injection molded, the set includes two sprues, one the duplicate of the other allowing the modeler to build 7 different vehicles and 2 artillery pieces from each sprue for a total of 18 pieces in a box. Also included is a set of decals, which curiously does not match the number of vehicles. The instructions are isometric and printed on the box. There is no locating guide for the decals, just side view color drawings of the vehicles, so the modeler must rely on research for marking placement on the tops of the vehicles. Plus, the color call outs are poor. But aren’t all WWII vehicles olive drab?

What is included in the kit are the following vehicles: M-4 Sherman (76mm), M3 White Scout Car, GMC 2 ½ ton stake bed truck, DUKW, LVT-4, WC51 1 ¼ ton truck, a jeep and two 105 mm howitzers (one in carriage and one in firing position). A head scratcher is why mold one howitzer in firing position when it is intended for the deck of a ship. It is also a somewhat curious mix of vehicles in that the LVT-4 was used in the Pacific only, and the White Scout Car quickly went to lend-lease. While the detail of some of the vehicles is superb, like the Sherman and the DUKW, the LVT-4 is weak. Part of this issue is the how the parts are molded. Apart from the Sherman, which is made of 5 parts, and the howitzers, the rest of the vehicles require assembly of two halves, which results in a seam.

Assembly goes quickly, since there are so few parts. The Sherman was the most fun to assemble and that took less than 5 mins. Removal of this seam in the LVT-4, Scout Car, DUKW and 2 ½ truck results in an ugly seam in the bed of these vehicles. The undersides of the wheeled vehicles are not attractive but will not be seen. The most ill-fitting vehicle was the 2 ½ which ends up with a gap in the tailgate. So, after seam removal and clean up the vehicles are ready for painting.

In painting I used a mix of olive drabs, the base color being an old ¼ oz of Pactra paint I had. I then painted the wheels and tracks flat black. After a wash of dark gray color by Flory Models, I used MM SAC Bomber Tan to drybrush the details on the vehicles and a gray for the tracks. The resulting detail was pretty good for 1/350, especially the Sherman. I used a mix of kit decals and decals from L’Arsenal intended to be used with their resin vehicles. I found that the AFV Club decals snuggles down well with Micro Sol, but I used Solvaset on the DUKW because of the ribs. I prepped the surface and sealed the decals with Future and then flat coated with Testors Dullcoat.

This is a decent set, albeit expensive for 18 vehicles ($1.33 each at full retail). The fact the many vehicles are in two halves, is also a detraction. Still, I am happy with the results. It is an odd mix of vehicles, which may leave you with ones you can’t use. I and others would have liked AFV Club to release sets of vehicle types, like all trucks or all tanks as Trumpeter does for aircraft. That said, this set offers vehicles not found anywhere else. I recommend this set.