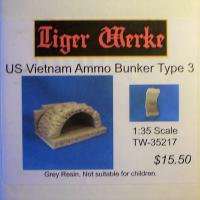 Ammo bunkers were used in Vietnam at Fire Support Bases-FSB (artillery emplacements) for the storage of ammo, powder, and fuses. Built with any available material including 105mm wooden ammo crates, metal culverts, PSP, or wooden planks these ammunition bunkers were everywhere a FSB was located. Some of these structures were also used as personnel shelters.

Tiger Werke has done the modeling community a service by providing not one but three different style of ammo bunkers that are suitable for any 1/35 scale Vietnam-era fire base diorama or vignette This particular review revolves around TW-35217, the Type III Ammo Bunker. This style shows a section of culvert stacked with sandbags protecting a small bunker that was constructed from empty, wooden ammunition crates.

This two-piece resin kit, from Tiger Werke's, comes san any pour stubs, cleaned up and ready for paint. Assembly is kind of non-existent as all that’s involved is placing one bit on top of the other...after any painting/weathering you might wish to do. The casting are first rate and exhibit petite wood grain on the ammo crates and very realistic sag and creasing molded into the sandbags. Let's not forget the wonder corrugation on the section of culvert....

Painting began with a primer coat of black from a rattle can. That was followed with a base coat of Burnt Umber for the crates (walls/floor), Gunmetal for the culvert section (roof of the structure) and Raw Sienna for the sandbags. Each of these paints are Folk Art acrylics. The crates were graced with a wash of Splash Mud from AMMO/MiG while the sandbags garnered a rather wet dry brushing of Pueblo (Folk Art). Both pieces were further weathered with a dusting of Europe Earth pigment from AMMO/MiG.

This 1/35th scale Vietnam Ammo Bunker , as well as the other Ammo Bunkers, from Tiger Werke are a must have if you plan on doing any kind of diorama or vignette involving artillery in Vietnam. Which is not to say that they can't be re-purposed as shelters or firing positions with the simple removal of the 'roof'. A lot of different structures ( living quarters, como shacks, officers club, etc.) were fashioned from those empty ammunication crates....

My thanks to Tiger Werke and IPMS/USA for the review copy.