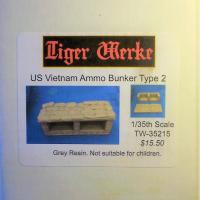 Tiger Werke is adding to its line of resin diorama accessories with a U.S. Vietnam Ammo Bunker. The company has two other types of ammo bunkers available but this missive is only concerned only with the Type II version.

These ammo bunkers were ubiquitous in Vietnam during the U.S. participation in that war. Used at fire support bases (semi-permanent artillery emplacements) as a means of protecting ammunition for the artillery pieces. They were somewhat of a DIY project as most of these structures were constructed using the empty wooden ammo crates and loads of sandbag reinforcement for the roof. Often the ammo bunkers would be incorporated into the sandbag or earthen parapet surrounding each gun emplacement. These ammo bunkers were also used as personnel shelters (in the event of a mortar attack) or for other storage.

Tiger Werke provides a nice, crisply molded kit of a ammo bunker, this one with two bays. The Type II ammo bunker is cast in gray resin and comes in two parts: the sandbagged roof structure and the ammo crate walls/floor. All of the pour stubs have already been remove and the parts arrive ready to be painted. The casting are lovely with nice detailing on the sandbags and wood grain incorporated into the ammunition crates.

After 'assembly' I began the painting process by spraying the resin bits with black primer from a rattle can. Once that was dry I applied a liberal coating of a light brown mud wash from AMMO/MiG to the walls and floor of the bunker. That wash kinda 'clogged' the wood grain on the cast parts so I decided to dry brush the entire piece with Linen from Folk Art. (With varying degrees of success.) That was weathered with some AMMO/MiG Dark Earth pigments. The roof of the structure was initially painted with Folk Art Raw Sienna. I found that a bit too stark and over painted the Raw Sienna with Nato Green from Tamiya. ( The entire painting/weathering process wound up being a bit on the sloppy side.) That was weathered with a heavy dusting of Europe Earth pigments from AMMO/MiG. This and the other ammo bunkers in the series from Tiger Werke will make for a most welcome addition to any artillery themed diorama or vignette that you plan to build. While these kits are primairily for that purpose ( ammo bunkers) there is no reason one couldn't use them as a protective shelter for any number of scene in 1/35th scale. Remove the sandbaq roof and you could find yourself with a firing position for infantry....

My thanks to Tiger Werke and IPMS/USA for the review copy.