US Pilots with JHMCS Helmet Seated in a/c 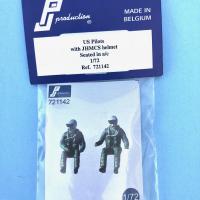 If you are looking to add a little life to your modern 1/72 scale aircraft by including a pilot wearing the JHMCS (Joint Helmet Mounted Cueing System) helmet, PJ Production has come to the rescue. This new release includes two pilot figures in slightly different poses and will look great in your F/A-18, F-15, F-22, or F-35. While also used in the F-16, the figures are seated at the wrong angle for the Falcon’s ejection seat but set 721124 will fulfill this need. For the detail created in these small figures, I would highly recommend this set as a great addition to the cockpit.

From my research, this new style of helmet began to be ordered by Boeing in 2000, and by August of 2006, there were ten international customers ordering this system. The helmet is made to allow the pilot to quickly acquire and aim at a target by just looking at it. The system also supports designating both air and ground targets and raises pilot awareness of important aircraft parameters such as speed, altitude, angle of attack, and even gravitational pull. All of this is intended to aid the pilot in flying the plane as efficiently as possible in any conditions.

The packaging for these figures includes a single pour block which holds the two pilot bodies along with three of the arms. Looking at the front of the pilots, the one on the right is molded with the left arm in place. As I did not have an aircraft ready for either pilot to immediately fill, I have left the arms off at this time to allow for positioning when they are added to a cockpit. The pilots will look great in most modern fighters, the exception being the F-16 with its slightly reclined ejection seats.

To paint my figures, I started with airbrushing Stynylrez Black then added their White by spraying straight down from the top to add natural highlights. My base uniform color was Vallejo Green-Grey, which I added some Tanker Highlight to for highlights. Applications of AK Uniform Definition Filter Green Glaze provided the shadows. I used a paint from the Andrea Flesh Set for the small skin area that is exposed. Along with Tamiya Figure Accent Color Pink-Brown. The helmet received Model Master Acryl Aircraft Gray and Gloss Black as well as Stynylrez Gray for the top of the cueing system. This was based on photos found online during my research as there are many options available based on customization by the pilots.

As far as my hits are concerned, the level of detail is fantastic for these small figures as they even include the communication cord for the helmet. Once painted and given a wash, the details in the flight uniform pop out to show the level of craftsmanship involved with creating these figures. My sample had a couple of spots where bubbles were present during the resin pour, but for this scale, I am not calling that a miss. You will also need to add your own hose for the oxygen mask, but once again, I would not consider that a miss as connection points can vary by aircraft.

In conclusion, I would highly recommend these figures to any modeler wanting to add some life to their 1/72 scale fighter. With a great level of detail molded in, these will help to set your project aside from others and help any non-modelers looking at your project understand the scale of the plane.

I would like to thank the folks at PJ Production for providing these figures to the IPMS-USA for review, to Phil Peterson, who runs the review corps, for allowing me to perform this review, and to you for taking the time to read my comments.