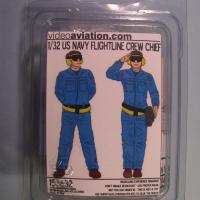 A relative newcomer to model accessories is the Italian company Videoaviation, which started producing items in 2012, and was recently picked up as a supplier of review items for the IPMS-USA Review Corps. The founder states that he was a former video producer of military aviation subjects, who has now turned to producing accessories for modelers. He mentions that development is performed using CAD (Computer Aided Design) and then printed with “rapid prototyping devices”, which allows for simultaneously producing an item in 1/72, 1/48, and 1/32 scale.

My review is the US Navy Crew Chief Set, which includes one saluting figure and one standing at ease. The figures are cast in a flesh colored resin that seemed to clean up more like a plastic than a resin. The saluting figure consists of four parts, while the at ease figure is cast as a single piece. The figures come with coveralls for their uniforms, which are probably more modern than what was worn when I was serving. As there are no life jackets molded on the figures, they would be representing sailors stationed ashore at a Naval Air Station. A single sheet of paper provides instructions, including painting suggestions and color photographs of the HGU-25 helmet being worn by real sailors.

I painted my figures using the Andrea Flesh Set, Vallejo Prussian Blue, Dark Prussian Blue, and Black, Model Master Acryl Dark Blue, Testors Brown (in the square-based bottle), Model Master Lacquer Silver, and Gunze Sail Brown. I lightened and darkened the Prussian Blue for the uniform wrinkles, and I mixed Model Master Acryl Chrome Yellow with Vallejo Metal Medium to create the reflective yellow belts. I chose to paint the HGU-25 helmet brown for the saluting figure to represent a plane captain, while the at ease figure received blue to represent a plane handler in training.

My hits for this figure set are that they represent modern uniforms, and are great for creating a shore-based scene. The level of detail is very good, although I needed to get paint on my figure in order to see some of the detail.

My only real miss for this set was that my at ease figure seemed to be molded with the mold halves not quite lined up, as there were some seem issues that even after cleaning, are still visible. If I were to make a couple of suggestions, I would have liked the inclusion of a list of color choices for the helmet, and what each color signifies as a job position. I would also have liked to see either color photographs of the completed figures or of a real sailor dressed this way for reference during the painting, although a little Internet research provided what I needed.

In the end, I would recommend this figure set to anyone wanting to show modern US Navy aircrew figures next to their 1/32 scale plane. The set is easy for anyone to use, as painting is the only time consuming part of putting these figures to use.

I would like to thank Videoaviation for being gracious enough to provide this figure set to the IPMS-USA for review! I also like to thank Dave Morrissette for his time and efforts in running the Review Corps as well as allowing me to perform this assessment. I also appreciate the folks behind the scenes in the Review Corps who keep the review machine running so well, and finally my most sincere gratitude to all who take the time to read this.

Saluting figure - right side
Previous Next