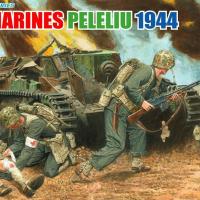 On September 15, 1944, the U.S. 1st Marine Division began the assault on the island of Peleliu in the Palau Islands. What was expected to be a four-day battle turned into a two-month slug-fest as marines tried to root out the dug-in Japanese troops. This battle would prove to be, proportionally, the bloodiest battle the Marines would fight in WW II, made even worse by the fact the island had little strategic value. Eight marines would receive the Medal of Honor for actions on Peleliu, five of them posthumously.

This Dragon release depicts four marines from that battle, although they could represent marines from any of the late war fighting. There is a wounded marine being tended by a U.S. Navy corpsman, a kneeling officer, and a running figure with a Browning Automatic Rifle (BAR).

The box contains three sprues of flash-free gray plastic, two of which are GEN 2 weapons, with a total of 121 parts. Some of the parts are very fine, so take care in removing them from the sprues. Also, each part will require sanding or filing to remove seams.

Figures 1 and 2 are the wounded marine and Navy corpsman. Since they are touching each other, it’s best to build them together. Start with legs and torso, then add the arms for the medic; he is holding the wounded man’s leg with his right hand and wrapping the wound with a bandage with the other. Now is a good time to add the ammo pouches to the wounded man’s belt. He is actually an ammo bearer for the BAR. He has a belt with 6 large pouches. You may have to carve a little off the bottom of some of the pouches to get them to fit. He also has two bandoleers of rifle ammo for his own weapon; these should be added now before you glue on his arms. Part A8 is the torn trouser leg cut away so the medic can get to the wound. I could not get this part to fit as I wanted, even with cutting and filing, so I just glued it on and filled the gap with putty. When I glued on the left arm, the hand did not rest on the corpsman’s shoulder, so I cut it off with a fine saw and leaned it in a little so it looked more natural.

The corpsman has an unusual suspender system which was unique to medics and gave extra support for the large medical bags on both sides. I had to file and carve out some of the back of these bags to get them to fit properly on the figure. I left them off for easier painting. The corpsman wears a pistol in the instructions; I left this off since the medical bags would have covered it up, but it was common for medical personnel in the Pacific to carry sidearms. Also, I sanded off the medic’s armband on the right arm. Japanese snipers singled out medics, and from my research, on Peleliu no red cross markings were visible on medical personnel. Two pieces, parts B10 and B11, are for the medic but are not shown on the instructions or cover art. These are inserts for the medical bags, to be laced inside the bag. One holds vials of pills, the other looks like extra dressings. I imagine they could be laced onto the eyelets on the front of the medical bags, but I can find no photographic evidence they were used this way, so I left them off.

The standing marine with the BAR is in a great action pose. Once again, add the ammo pouches before adding the arms. The BAR in the kit is an excellent GEN 2 version. It includes a delicate bipod which can be open or folded, plus a carrying handle on the barrel. To cut back on weight, many marines removed the bipod and handle. I left both parts off and had to fill the slots in the barrel for these parts with a dab of Tamiya putty. On both the BAR gunner and wounded man, the instructions on the back of the box indicate gluing the canteens to the back of the belt. In reality, there were no eyelets there; the eyelets were on the ammo pouches, so glue the canteens, first aid pouch, and K-Bar knife to the bottom of the pouches.

Three of the figures have small packs, most likely cut down M1928 haversacks. The camouflage ponchos were strapped on top, and the entrenching tool, or shovel, was hooked on the front of the pack. A small strap was wrapped around the e-tool’s handle, which I made from a strip of paper. I left the packs off till they had been painted.

I call the crouching figure the officer, since he has a map case hanging at his left side. The instructions say to use an M1 Garand rifle as his weapon and show the bayonet part D9 added. D9 is not a bayonet, but a poorly detailed M3 fighting knife. Also, the rifle will not fit well in the figure’s hands. I recommend using the M1 Carbine which is on the same sprue as the BAR. The figure in the box art has a carbine, and the figure also has an ammo pouch for the carbine. I gave the officer the M3 knife intended for the medic, and used the officer’s knife and scabbard with the medic. I left the knife out of the scabbard as if the medic had used it to cut away the wounded man’s trouser leg. You will notice the officer’s canteens are a different style than the others. These are called “cross-over” canteen covers by collectors, and were a style unique to the Marines, who also used the more common M1910 style used by the Army. At this point in the Pacific war, two canteens were essential in the heat, and nobody cared if a marine had two styles of canteen cover, so I used one of the cross-over canteens on the BAR gunner, the other on the wounded man. Note, however than the cross-over canteen covers did not have ribbing like the M1910 version, so I filed this off. Lastly, the officer has a helmet chin strap. I filed this off too, most marines wore the helmet straps loose.

After a coat of white primer, the parts were examined for any seams. I paint the flesh first, and I use Testors Light Tan, #1170 a good color for soldiers who are outside a lot. I mix flat black with the light tan for shadows, and lighten the base color with white for highlights. Since the wounded man has lost some blood, I made him a little paler. The mouths and eyes are a fine line of dark brown, and then I add hair and eyebrows.

The sage green utility uniforms are a mix of Testors Flat Green, Olive, and Flat Tan. This makes up a shade much like the box art, which shows the marines when they landed on the island in new uniforms. Buttons were black metal. The marines wore no insignia other than a stenciled “USMC” with the eagle, globe and anchor on the left breast pocket. A few years ago, IPMS/USA had a set of 1/35th decals for figures with this pocket stencil. The pocket is not visible on most of the figures, but I used one of these decals on the BAR gunner.

For the web gear, I used Model Master Afrika Grunbraun ’41, a color very close to the web gear on the box art. This color will also be a good match to the base color for the helmet covers. Another useful color for the field gear is Model Master Wood. Marine gear had a yellow/tan shade to it, and these two colors, mixed with olive and white, should give you a good range of shades for the ammo belts, canteen covers, packs, field suspenders, and leggings. Canteen caps could be black plastic or aluminum. The cross-over canteen covers had a drain hole in the bottom, and since the BAR man is bent over, you can see the bottom of his canteen. So I painted a dark circle on the bottom, and later put in a dab of silver to represent the canteen cup.

The base color for the helmet covers was the Afrika Grunbraun, and for the ponchos, which had a darker, greener color, I mixed in some flat green. Then I added spots of two shades of brown, and two shades of green. Don’t forget to paint the underside of the officer’s helmet cover flaps light brown. It looks like all the helmet covers on Peleliu were worn green side out. I once painted some marines with both brown and green camo showing and a friend of mine, a former Marine, said that was wrong, they always were uniform.

I painted the leggings wood tan, and the boondocker shoes a beige color. These were called “roughout” shoes, since the smooth side was inside the shoe. The wounded guy got some blood on his leggings and torn pants. Don’t use bright red for blood, mix a little black with it.

Now, I had to add the pieces to the figures. The helmets were glued on, then I cut thin strips of paper I had painted light olive to represent the straps. The longer strap goes on the right-hand side. Almost every marine in pictures has the straps hanging loose.

The weapons also got straps made of paper. The BAR has a leather sling, while the carbine and rifle have web slings. I glued the medical pouches on the corpsman, but first put a thin strap made from paper across his back. The pouches were connected by canvas straps so they didn’t bounce around while running. There is also a strap in front, which can be seen on the cover art. These paper strips for the medic’s straps and chin straps add a lot of detail to the figure.

Overall, the detail on these figures is very good. Other than a couple of glitches in the instructions, they build up nicely straight from the box and can stand alone or be used with a vehicle, such as the nice Amtracs out now.

Thanks to Dragon Models USA and IPMS/USA for the review kit.

View from rear
Previous Next