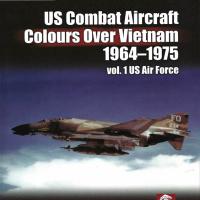 The book is lavishly illustrated, primarily with color photographs of each type while in theatre and many of the notable individuals who flew and serviced them - considerable coverage is given to Col. Robin Olds’s leadership of the 8th Tactical Fighter Wing (including the origin of the “SCAT” name for all of Olds’s aircraft), and this is the first I’d heard of Brig. Gen. James Stewart’s combat B-52 mission over South Vietnam in 1966. Tables are also included listing the squadron/wing to which each type was assigned, with the corresponding base location and the assigned two-letter tail code where applicable. The highlight of the book are the many excellent left and right side color profile illustrations. The F-4 and F-105 sections also include top view and spot close-up illustrations. It should be noted that for many of the aircraft, the color photos show good topside views of the aircraft camouflage patterns.

While this by no means a complete or comprehensive encyclopedia of USAF Vietnam combat aircraft (not covered here are combat cargo, gunship or strategic reconnaissance aircraft, nor any helicopters), it is probably as good a “one stop” major USAF Vietnam aircraft reference as you liable to ever see. The photos are large, clear, and numerous, and the color profiles are outstanding. This is a long awaited and highly recommended publication. My grateful thanks go to MMP Books and IPMS for the opportunity to review this excellent book.