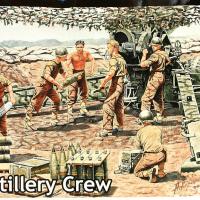 The set had very minimal flash and no ejection pin marks. The few mold lines there were easily removed with a sharp blade. There are no decals, and some painting instructions. ou will need to copy what you see in the illustration. There are not even any part numbers on the sprue, just a picture on the back of the box with the numbers listed next to the part.

The figures went together without a lot of shaping and filling. Two of them are balanced so they can stand without pins or glue. The tools and shells fit the hands fairly well and are nicely made.

Painting these figures will require quite a bit of research and thought before attaching any of the extra equipment and ammo. The photos on the back give you general idea of what the colors are, but my advice is to review your figure references for proper color.

The figure with the shell ramming rod is a Black soldier and requires a little planning to get the figure together. I glued the arms on and left the ramming rod off (the hands are molded to the rod) until after finished base coat painting. When I tried to glue on the hands and the rod, they did not fit together. I had to shave and putty to get the arm to flow into the hands at the wrists. If I did this figure again, I would glue the hands onto the arms and while the glue is not set completely, I would then glue the arms on so I would still have time to adjust them for the best fit.

Master Box is becoming the leader in vignettes in a box. All you need to do is add an artillery piece and you have an instant diorama. The kit is well done and appears better than my figure painting makes it look.

Figure 6 back
Previous Next