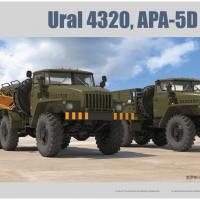 From Military-Today: “The Ural-4320 military truck is a further development of the previous Ural-375D. Its development started in 1972. Changes from the previous model include new engine, enlarged bonnet plus revised fuel, cooling, and electrical systems were introduced at the same time along with many other detail modifications. Its production commenced in 1976. The Ural-4320 took many of the roles previously carried by the Ural-375D. Production of the Ural-4320 still continues. This truck is in service with the Russian military as well as many other countries.

Vehicle is entirely conventional in design and technology. It has a payload capacity of 4.5 ton off-road and 6 ton hard surface roads. A standard troop/cargo platform has drop sides, drop tailgate and removable tarpaulin with bows. In troop carrier configuration it accommodates 27 troops. This military truck also tows trailers or artillery pieces with a maximum weight of 12 tons. Cab of the Ural-4320 provides seating for the driver and two passengers. An add-on armor kit has been developed for this military truck. It protects the cab end engine compartment from small arms fire and artillery shell splinters.

The Ural-4320 is powered by YaMZ-740 10.85-liter V8 diesel engine, developing 210 hp. Later it was fitted with improved diesel, developing 220 hp. Current production models are available with more powerful diesel engines. The baseline is a YaMZ-238M2 engine, developing 240 hp. It is known that this truck was fitted with a Caterpillar engine. A 5-speed manual transmission is fitted across the range. The Ural-4320 has a full-time all-wheel drive and is fitted with a centralized tyre inflation system. Vehicle can operate in climatic conditions, ranging from -50°C to +50°C. With preparation all models can ford water obstacles up to 1.75 m deep. Many versions of the Ural-4320 exist.”

This 1/48th scale URAL 4320/ APA-5D release has parts for two complete truck models. The URAL 4320 is the standard cargo vehicle, the other is of course, the APA-5D with a well detailed auxiliary power unit in lieu of the cargo bed.

Construction is pretty standard for a truck/soft skin model as it starts with the chassis. The chassis rails are assembled with all the things that one would expect; stiffeners, detailed axles, drive shafts, power takeoffs, battery box, fuel tank, etc. I did encounter a small molding glitch while assembling the basic chassis. The mounting holes on parts # B65 (rear axle assembly) and #B6 (part of the power takeoff assembly) didn't get opened during manufacture. You may need to use some of your crafty modeling skills to get those bits to fit properly. I simply cut off both sets of mounting pins, sanded the offending areas to shape and everything fit well.

Kitty Hawk also includes a combined transmission /engine assembly with radiator and air cleaner. This engine configuration is perfect for this kit. You will be able to see the lower portion of the engine when the completed model is viewed from the side. Otherwise any detailed engine would be known only to the you. But don't let this stop you from adding any additional detail or wiring that you desire.

The final step of assembling the chassis is to add the seven tire/wheel assemblies (one a spare tire). The tires are molded in a black, hard vinyl and have excellent tread and sidewall detail. There is just enough give with this material to place the wheels into the tires, which will aid with painting. The wheels are two-part ditties with specific parts for front and rear tires, as well as, the wheel hub for the spare. Remember: 'before assembling your model kit, read thoroughly these instructions carefully.'

For the URAL 4320 all that is left to do is assemble the cargo bed. That cargo bed has nice molded detail on the bed in addition to wood grain detail on the side panels. Parts are provided for the fenders and rear stop lamps (part #B35) on the chassis.

The assembly instructions start on the driver's compartment by adding seats and a dash panel to the driver compartment interior. The pedals and gear shift levers are molded into that interior part and don't come as separate parts, but there is ample opportunity to super-detail the cab interior. Kitty Hawk provides a nice decal for the instrument panel but no other interior placards or warning labels.

A small fret of clear parts is available for the four cab windows, headlamp lenses, and the two spotlights. Clear parts are also included that can be used to replace part #B35. The inclusion of these extra clear parts turned out to be a godsend as I lost one of the green plastic bits. The only fit issue I encountered with these clear parts was with the sections for the cab door windows. The opening for the clear parts is a tad too snug but some judicious sanding solved that problem. All of the other clear parts fell into place nicely.

Kitty Hawk has you completely assemble the driver's cab and attach that assembly to the chassis. You might be better served by attaching the cab floor (Part # B56) to the chassis now and attach the rest of the completed cab to that part later in the assembly process. The completed assembly can be glued to the chassis after everything is attached (per assembly instructions) but it seems too fiddly an operation for my sensibilities.

At this stage you skip ahead to assembling a detailed tow bar and utility ladder. There are parts for two complete tow bars and ladders. The ladder has ten rungs plus a bracing part (# C27) that is attached last. There are two parts on the lower portion of the ladder that are labeled as part # C28, it should be part # C17. The tow bar and the utility ladder have some delicate in-scale parts, so be careful during assembly.

Getting back to the driver's cab, you attach separately molded doors, fenders, assorted side mirrors, etc. The roof of the cab is a separate part. This seems to allow for better molded detail on all parts concerned than if it were modeled integral to the cab. All of the window 'glass' is provided as individual clear bits, and all look good. All that's left to do is attach either the assembled truck bed or APA unit.

That APA unit is a separate sub-assembly and exhibits suitably molded detail. Actually, the molded detail is great! The APA unit has plastic bits for the attachment points for the various hoses common to the auxiliary power unit as well as a bunch of fiddly bits for grab handles and photoetched bracing.

One thing to watch out for is with the boom arm platforms (Part# A17 and # A 18). These platforms get 'tapped' between the base (Part # A 28) and the power unit (Part# A 36). Once that is done it is off to the races, or to boom arm construction at least. Lots more fiddly bits here for access steps, hose cradles and assorted other parts. When you are finished you'll have a great representation of the boom arms common to an APA-5D unit.

There is a small fret of photoetch included in the kit and this section is where most of it comes into play. There are bits for bracing and fender details, side marker lamps as well as two metal parts (grills) that represent utility/stowage baskets on the boom arms of the APA unit.

The APA-5D unit has boom arms either side to allow the operator access to aircraft that might otherwise be too far away for the hoses to 'stretch'. Those boom arms are wonderfully molded, look great once assembled, but are dainty and a bit wonky to build.

There is a length of 'cable' provided in the kit for all the hoses that festoon the APA-5D unit. What isn't provided is an adequate diagram or drawing of which cable goes where or how long those cables might be. Best guess is going to come into play here. I was unable to find a decent image online of the booms on the APA-5D unit in action so your artistic license will serve you well. There aren't any end connectors provided for the hoses so you will need to fashion some of your own.

The assembly instructions have a centerfold, of sorts. There are some nice, five-view full color painting guides of both trucks in the middle of the booklet that highlight some minor (side reflectors, stop lamps) detail painting. There is a small sheet of decals that are limited to warning stripping for the front bumpers and some warning placards for the APA-5D unit.

Exterior color choice for either the URAL 4320 or APA 5-D unit is Russian green or some shade of Russian green. I choose to use Tamiya's J.N. Green (XF-11). One because I didn't have Russian Green and it seemed close enough. (This is a government vehicle, after all.) Don't despair, the monotone color scheme will give you an excellent opportunity to work on your modulation skills. [Technical Note: Modulation is a painting technique that helps give depth and volume to an object, particularly one that is a single color.]

The assembly instruction suggests flat black for the chassis and that was good enough for me. I couldn't find a decent image of the interior of this vehicle, but it being a 'Ruskie' truck, some other shade of green would work. I decided to use Tamiya's Cockpit Green (XF-71) for the bulk of the interior and added NATO Black (XF-89) details (pedals, steering wheel, gear shift levers, etc.) as seemed appropriate. For varietie’s sake I painted the seat cushions Buff (XF-57). The 'centerfold' section also includes a single view, color image of both the ladder and tow bar. Both are overall orange-yellow with black tires, of course, on the tow bar.

If you repeat all of the above you'll have two nicely molded, easy to assemble, marvelously detailed URAL 4520 trucks. This dual kit of the URAL 4320/ APA-5D from Kitty Hawk has loads of molded detail with plenty of room for any level of extra detailing you might wish to do. Either way these trucks will look beautiful parked next to any of Kitty Hawk's Russian aircraft kits which could be the basis for an outstanding diorama.

My thanks to Kitty Hawk and IPMS/USA for the review copy.