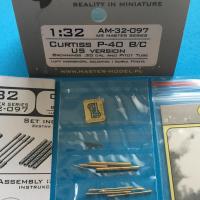 Master-Model released these closely related aftermarket barrel + pitot upgrade sets for the early (i.e. B/C/MkII) 1/32 P-40 tool that exists. The two upgrade sets, designated U.S. Version and British Version respectively, are so closely related that it makes sense to review them both at the same time. I have the Hobby Craft kit (Trumpeter tool re-boxed with AVG decals) and a good friend of mine has the Trumpeter kit which sports the British markings on the box top – so I had a keen interest in looking at these Master-Model offerings and comparing the components to their kit counterparts. My sincere thanks to Master-Model for providing these sets for review through the IPMS USA Reviewer Corps.

Both sets are well packaged. The contents are bagged in front of a sturdy cardboard backing. The instructions are neatly folded behind the backing, providing more package rigidity to further protect contents. The baggie containing the parts is thoughtfully subdivided into five individual sub-compartments to keep the parts from damaging each other.

The two sets differ only in pitot and wing gun cooling jackets. Instructions are well presented using installation diagrams that are thorough and easily understood.

All items are clearly superior to their kit counterparts in detail. The fit tolerance when mating the cooling jackets to the inner barrels is amazing – so close in fact that I initially wondered if the fit was perhaps too tight. With some patience, I used a twisting motion to maneuver each inner barrel through its respective cooling jacket, then carefully used a fingernail on each end to complete the final seating. Apply the old adage that if it seems forced, it isn’t lined up – re-align and try again. Once seated I do not believe there is need for glue, although I would probably use a touch of thin CA at the trigger (unseen) end. One .303 cooling jacket did have loose brass shavings inside, but these were easily removed with very fine tweezers.

There is wider application for the British set given the kit and aftermarket decal options that prevail. The AVG men in fact flew the export version of the P-40C (basically a B with a drop tank capability and self sealing fuel tanks) – which the British also flew if only by a different name - the MkII Tomahawk. So if you’re going to use AVG or British markings on your build, you’ll need to use the .303s and the L shaped pitot that come in the British set.

The front sight and rear sight PE are a bonus and provide much finer detail than the kit PE and plastic options. It is also nice that Master Model provides two rear sights – a backup is good to have. They also provide a different cut at each end of the .50 cal tubes which provides the modeler two build options for the fuselage mounted guns. The AVG planes I looked at used the short .50s with tapered ends.

I am pleased that the wing guns consist of two pieces. This allows the modeler to use burnishing fluid effectively on both the barrel and the jacket before construction of each gun. This may however require light sanding where the mating surfaces meet.

These are highly detailed upgrades to kit pieces that will be very visible on a completed model. Highly recommended.