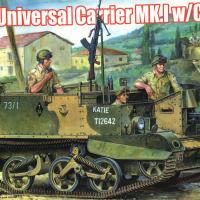 I will start this review with a simple statement: this is one of the most complex, highly detailed, and simply wonderful models I have ever had the pleasure to encounter. It has 13 sprues of plastic parts with exquisitely fine details. Additionally, there are three frets of photo etch brass parts, 32 metal springs, 8 tiny metal shafts, and a length of metal chain. The small set of decals covers 4 different vehicles from three different nations’ armed forces. And, despite all this complexity, the kit assembles, with a few notable exceptions, extremely well. So read on!

Riich’s instruction booklet, as befitting a kit with this much detail, is very complex…but, despite this, is pretty easy to follow. The construction sequences number 44 in total, over 23 pages. Careful study of the instructions is highly recommended prior to beginning construction to familiarize yourself with the process. Once you start assembly, continue to study each assembly sequence carefully to make sure you end up with the right part, in the right place, at the right time. There are an awful lot of parts that need to be squeezed into a relatively small model, and things get very cramped, fast. So again, carefully study the instructions and test fit each part carefully with the next, and you shouldn’t run into any particular difficulties.

The model comes with a full engine, but unfortunately there is no real way to display all the intricate detail once it is installed into the lower hull of the kit. The kit lacks any real access hatches to leave open. Oh, well, YOU know it is buried in there, and that’s what counts, right? After the engine is installed, you move on to one of the more hairy areas of the model, the road wheels and suspension units. This is where those 32 metal springs and tiny metal shafts mentioned earlier come into play, along with a bunch of VERY small PE parts. I actually dispensed with the PE parts here, as in the only instance of this in the kit, Riich supplies alternative plastic parts for the PE parts, and I saw nothing but headaches coming if I used the PE parts. So I didn’t, and there was no loss of detail with my choice. If the instructions are followed carefully, all the road wheels and suspension parts fit together very nicely. I simply caution the modeler to take your time, study those instructions, and you will be fine. I would say that it might make sense to prime and paint the road wheels prior to incorporating them into the model build sequences. I didn’t, and I found the rubber rims on the wheels VERY difficult to paint afterwards. I will have to resort to mud and other crud to hide my sins a little later.

Assembly Sequences I found particularly challenging were #11 and #12, the driver/co-driver area. This involves a number of very small PE parts that need to be folded precisely to go together with their plastic brethren. What looks to be a hand brake mechanism was a particular challenge, PE parts Pb38/Pb4/Pb8/Pb9 and plastic part A55.

However, for me anyway, THE most challenging part of the model came in Assembly Sequences 27 and 28, which involve the construction of the driver and co-driver seats. First, the little holes in the numerous PE seat legs aren’t quite big enough to go over the plastic seat pins they are supposed to glue on to. Then there is the matter of getting four legs to align on plastic part B5 in each Assembly Sequence, such that they fit nicely into the slots on the hull floor. A huge problem, though, is that by this stage in the assembly sequences, the area you are trying to fit these little seats into has become EXTREMELY cluttered. So, here is my suggestion: when you finish Assembly Sequence 12, jump ahead to Assembly Sequences 27 and 28, and while the drivers’ area isn’t so cluttered, assemble the seats, test fit them to the floor of the hull to make sure everything is aligned properly, and then put them aside until needed later. I do wish, however, that Riich had provided either an assembly jig for these seats and the PE legs, or some plastic alternative parts for the legs. Even if a little over-scale, they would have made it far easier for your average PE-averse modeler to get past this stage of construction.

Assembly Sequence 20 and 23 shows the modeler installing the crew’s rifles. I decided to paint the weapon mounting equipment and rifles separately, then install them later. I can’t see how it would be possible, given the confined spaces, to install the weapons at this stage, and expect to be able to paint them after the completion of all the assembly steps. I also left off the two side panels of the vehicle in Assembly Sequence 31, parts E37 and E32, until after the vehicle had received its initial primer coat and first color coat. Just make sure that you test fit, and test fit some more, these two parts in section 31 so that you have a good fit for later assembly.

Two final notes: I added a little lead wire cable going from the back of the vehicle radio set up to the aerial mount. I also left off the plastic lens on one of the headlights, as I didn’t think painting it silver was the right way to go. I will search out an appropriately sized MV Lens or, failing that, make one myself with a blob of 5-minute two-part clear epoxy.

Riich provides paint mixes for the various colors by name, and also utilizing the Mr Hobby, Model Master, Humbrol, and Tamiya ranges, either colors straight from the bottle/tin or by mixing. I used the Tamiya range, thinned with Mr Color Self Leveling Lacquer thinner, but missing a couple of colors required for more exact mixes, I chose a close color that I did have and went with that. So sue me. I chose the NZ version in honor of my Great-Uncle Frank which, though a three color scheme, was not difficult to mask. Pin washes were achieved, as always for me, with artist’s oil paints.

The decals were printed in China and were a little thick, and also ever so slightly off-register. Nothing dramatic either way, and given all the decal selections that go over completely flat surfaces devoid of rivets or major curves, I can’t really comment on how well they would have settled down over such surfaces. A moot point, I suppose!

To conclude: this is a fantastic model kit, at the pinnacle of current state-of-the-art kit production. The parts are intricately detailed, but there is a fair amount of PE brass in the kit without plastic alternative parts in most instances. Given the number of parts, the PE parts, and the cramped working spaces involved, I would say this is not a kit for the beginning modeler. But for anyone with lots of armor building experience and patience, I can heartily recommend this gem of a kit. My sincere thanks to DragonModelsUSA for providing the review kit to IPMS/USA, and to IPMS for allowing me to review it.

And even more interior
Previous Next