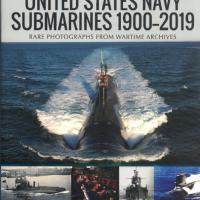 Michael Green is a freelance writer, researcher, and photographer. He specializes in military subjects and has authored and coauthored over 100 non-fiction books, for both children and adults. His books have been translated into several languages. Mr. Green is an honorary lifetime member of the "Marine Corps Tanker Association," as well as the U.S. Army Brotherhood of Tankers. Michael Green lives in Dale City, California.

Michael Green provides a great deal of coverage of the US Navy’s different submarine classes, from the first USN submarine, the Holland VI, to the future in the yet-to-be-built Columbia. It is truly amazing the changes that have occurred in the 119 years this book covers. Focused on submarine development, Michael, covers each class along with plenty of explanations on general submarine technology improvements. All photographs and illustrations have a nice detailed caption to further engross the reader. The sections include:

There is no shortage of interesting photographs and their lengthy captions. I found the three photographs on Page 170 and 171 quite interesting. An unarmed experimental submarine, AGSS-569 Albacore, confirmed the advantages of having a teardrop shape that greatly improved speed under water. Albacore was refitted many times with different hull, noise-reduction, tail, and propeller configurations that were put to good use in future submarine design. What I was not aware of was that it had speed brakes to help slow her down. Today, the SAGSS-569 Albacore is now preserved in a museum park in Portsmouth, New Hampshire.

Michael Green delivers a great summary on US Navy submarine development. I read this book over a week (there is more text than I have seen in any Images of War book). Michael Green laments that he wished he had room to present even more detail in text and photographs, so maybe there will be a Volume Two. If you have one of the previous books in this series, you know what you can look forward to.

My thanks to Pen & Sword, Casemate Publishing, and IPMS/USA for the chance to review this great book.