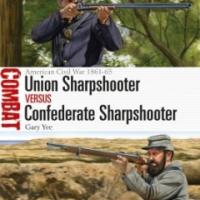 The American Civil War is a study in contrasts and similarities. Historians make a living comparing and contrasting both sides from every angle conceivable. Commanders, battlefields, tactics, and weapons are the usual subjects and this book focuses on the Sharpshooting arena. Published by our friends at Osprey Publishers, Union Sharpshooter VS Confederate Sharpshooters is authored by Gary Yee. Period photos, drawings, and maps convey a study in comparison and contrast in three battles where sharpshooters played an important role. A brief introduction opens the book, followed by chapters that cover the opposing sides, Fredericksburg, Vicksburg, Battery Wagner, an analysis, and the aftermath. A select bibliography and index complete the narrative. The book is printed on heavy stock paper and tells its story on 80 pages.

The Union was the first army to see the need for dedicated marksman to fill the sniping and advanced picket line requirements the tactics of the day demanded. With a large percentage of their troops from metropolitan areas the better and more experienced marksman stood out. These men were at first known to the officers in their command and assigned to these duties as needed. The increased need paved the way for northern units that began receiving specialized training. These men were highly valued as marksman and included the famed Berdan’s Sharpshooters in the east and what became known as the 66th Illinois in the west. These units were the models for the successful marksmanship training programs that continue into this day.

The Confederate high command on the other hand began the war believing that their troops had the marksmanship edge due to the rural nature of their troops. On the whole, their troops were far more familiar with the use of firearms and believed they had an entire army of sharpshooters. In terms of identifying trends and forecasting need, the Confederate high command was slow to realize the need of dedicated sharpshooters. All this changed with the introduction of the sharpshooter units in the northern army. The Confederates saw the increased success the north was seeing in sharpshooting and knew they needed to pick up the pace or get left far behind.

As the war progressed officers on both sides worked to fill the need of dedicated sharpshooters. Men like noted competitive shooter Hiram Berdan began raising and training specialty units that were conceived as marksmanship units and were outfitted with some of the best “Shootin Irons” of the day! Precision built and heavy target rifles normally associated with the fields of Creedmor were pressed into duty in the sniper role. Other rifles associated with good accuracy were also used. Early telescopic sights were becoming more reliable and heartier enough to survive the rigors of field use, and the advantage of taking longer, more accurate shots became apparent. As the war progressed the use of the heavyweight target rifle decreased, and the use of military rifles became the preferred weapon.

The three battles discussed show the value sharpshooters paid. During the Fredericksburg campaign, Confederate sharpshooters in the ruins of the city delayed the building of the pontoon bridge being constructed by Union engineers as a way to get troops across the Rappahannock River to attack confederate positions. The Confederate sniping positions in the vicinity of the pontoon bridgehead delayed Union Army Commander Ambrose Burnside’s troops long enough to allow Lee the time to bring two additional army corps into the area with disastrous results for the attacking Union Army. It’s unclear why Burnside didn’t ramp up his army’s capabilities in utilizing sharpshooter units that weren’t brought to bear to end the confederate superiority.

The situation at Vicksburg was different than what occurred in Fredericksburg. General U.S. Grant pushed Confederate forces commanded by General John Pemberton back into Vicksburg and then laid siege in an effort to defeat the rebel forces. Sniping took on a more focused role here as a method to demoralize the enemy into surrender, however both sides suffered from a lack of sharpshooter units with regular soldiers being pressed into duty as sharpshooters. Fort Wagner saw both siege and frontal assault operations focused to defeat an entrenched enemy. Both sides did not have dedicated sharpshooter units on hand to press the enemy but rather developed units on site to provide this type of coverage.

At war’s end neither side could claim total victory in sharpshooter development. What we see is a haphazard approach to the sharpshooter dilemma. The Union, while recognizing the need didn’t produce enough units or use existing units in the optimum manner to maximize the effectiveness of the sharpshooter. The Confederacy didn’t have the resources or manpower to maintain a dedicated sharpshooter program. All these things would finally coalesce further down the history timeline! But as we’ve seen in many areas of the Civil War, technology and tactics didn’t always advance at the same rate and we’re left with less than optimal results. Such is the scenario of the sharpshooting arena in the Civil War.

I recommend this book to modelers because of the numerous photos of many Civil War era weapons as a reference. I also recommend this book as point of departure for further study of the sharpshooting actions in the Civil War. Osprey publishes addition titles that tie nicely into this volume relating to weaponry and tactics that will give the reader the opportunity to further explore this fascinating topic. I enjoyed the well written text because it kept my interest, and the maps and diagrams add context to place the action within the broader view of the Civil War as a many faceted historical event.

My grateful thanks to Osprey Publishers and IPMS/USA for supplying this sample for review. For a complete list of the fine titles available from osprey Publishing, visit their web site at https://ospreypublishing.com