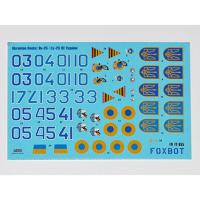 The Su-25 (NATO name: Frogfoot) is a subsonic, single-seat, twin engine aircraft developed in 1975 by Sukhoi. Designed to provide close air support for the Warsaw Pact ground forces, the Grach (or Rook) has seen much action over the years, from Iraq, Afghanistan, Darfur, Ukraine and as recently in Syria. This decal sheet focuses on Ukrainian aircraft.

The sheet is printed in Ukraine by Decograph on blue backing paper, clearly printed and in register. Carrier film is minimal. The sheet provides markings for two schemes – one in a tan-medium green and dark green splinter scheme circa 2004, and another with medium green with dark green “clovers,” circa 2008-2015. Some of the aircraft in the latter scheme were involved in the 2014-2015 conflict with Russian-backed separatists, and includes a few that were shot down. There are decals for eight planes, but nine schemes over all (one of them have both paint schemes for the same airframe).

The instructions are clearly printed on high-quality, colorful card stock. Note that the third page includes instructions for stencils, but they are not included in this decal package. This is because the Foxbot assumes you have stencils for them. This is good since that eliminates an orphan set of decals laying about, but if you do not have them, Foxbot also sells a separate sheet (72-0057), or you can buy the markings and stencil bundle (72-055T).  Interestingly, Foxbot’s instruction sheet recommends using Clear Prop’s stencils from its yet-to-be released Su-25 kit, if schemes 1, 8 and 9 are chosen.

I opted for scheme #8, a 3-tone splinter scheme for Bort 17, from the 299th Independent Aviation Aviation Regiment, based at Saki Airfield, in the Crimea, circa 2005. The colors in the instructions look attractive, but unfortunately are incorrect. Using the colors suggested, the two greens almost blend in together. However, you can get a very close approximation to the real deal using the following Tamiya colors:

While these colors appear odd, they are correct. I had a blurry image of one that I tried using color correction and ended up using XF-73 (JGSDF Dark Green) for color B, and it wasn’t until I had the decals on the model that I found a clear image of Bort 01, which had the same color scheme. At this point I did not want to strip the paint and decals, so I elected to leave it be.

The decals themselves were not overly thin but lay flat and reacted very well to Microscale’s Micro Set, Micro Sol as well as Walthers Solvaset, and once a gloss coat was sprayed over to prepare it for weathering, the decal carrier film is barely noticeable.

One thing to pay attention to is that some of the decals are specific to a side, but they are numbered identically, such as the “опасно” triangle marking sets (25 & 26) and the ejection seat warning triangle sets (27 & 28). Pay attention to which one you’re using or you’ll wind up with an upside-down warning in the case of the triangles or backwards-facing ejection seat warnings.

Other than the lack of directional labelling, the decals are excellent.

Ukrainian jets are known among aviation enthusiasts for their unique and original camouflage schemes, and Foxbot has done a great job with bringing these schemes to modelers. The decals are of very good quality and will add a splash of color to the modeler’s display case. I’d like to thank Foxbot for the opportunity to try these decals out and I would recommend them for your next Ukrainian Grach project.

The Su-25 hasn’t received a lot of 1/72 love from kit manufacturers recently, but in the late 80’s to mid-90’s, the Rook was hot topic amongst Eastern European kit manufacturers, based on how many reboxes there were. I can’t comment on how accurate they are as I am not in the habit of comparing models to drawings, but I have included some notes of what I know.

By some coincidence, Hobbycraft, Revell/Ace/Kangnam/Tsukada and KP all released their own kit Su-25 around 1988. All of them capture the basic shape, though Hobbycraft took a few more creative liberties with their interpretation. The general consensus is that KP has the more accurate rendition of the three and has raised panel lines.

Zvezda’s boxing came out in 1997, and was re-boxed by Italeri. This is early Zvezda, with recessed panel lines but not that easy to build, and is the kit this decal review is based on.

Art Model released the Su-28 aerobatic trainer in 2013, as well as two Su-25UB variants and an Su-25. I have not seen the kit, but it is considered the most accurate kit in production so far. It is also a little harder to find and I have heard that it’s quite a challenging build.

Because the Su-25 has a pretty basic shape, all of the kits above have the same basic parts breakdown, with some deviation and refinement. Art Model is the only one of them to have full intake trunking.

Clearprop will be releasing one in 2021, and from what I’ve heard will be the most accurate kit out there. Looking at the renderings, it appears spot-on to me, and looks to be a much more refined, modern kit.

And for you masochists out there, there is always the rare Airmodel vacuform kit (AM0365).

Note: Some of the markings are specific to a side but not indicated on instructions; stencils sold separately.