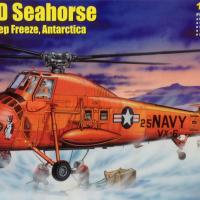 Thank you to MRC and Gallery Models for providing another example of an iconic USN helicopter, this time in the distinctive Operation Deep Freeze color scheme. The kit was a very pleasant and enjoyable build. Thank you also to the IPMS Reviewer Corps staff members who do the hard work behind the scenes, getting us kits to review and publishing our work.

This kit is the latest in a series of H-34 variants by Gallery. Excellent reviews of the H-34 Choctaw (by William Nichols), the H-34 U. S. Navy Rescue version (by Rod Lees), and the HH-34J (by Dave Morrissette) may be found on the IPMS site. I suggest consulting these reviews as there are many great ideas and suggestions that are pertinent to the UH-34D reviewed here. All three of these reviewers found items I would’ve missed.

Presentation (how the kit looks in the box)

The kit was packaged in a stout 16.5 x 10.5 x 3 inch cardboard with colorful box art depicting a VX-6 bird working a sling load in Antarctic conditions. The picture was chilling to me, reminding me of rotor downwash experiences when it wasn’t sub-zero, unlike the unfortunate ground crew shown on the cover. Eleven gray plastic and 3 clear sprues are included in the kit, in poly bags and snugly fitting in the box. Clear sprues were housed in a separate compartment inside the box and were unscuffed. The 2 photo-etch brass (PE) frets were shrink-wrapped and taped to a cardboard compartment divider. Instructions and decals were found beneath the sprues on the box bottom.

Inventory of the sprues revealed two “A” sprues. Gallery opted to provide different sprues for “bent-leg” and “V-leg” versions. You will have some large extra parts, in the group of 52 unused plastic and 20 unused PE parts. You will also have additional unused parts depending on which kit version you build. The rotor blades are molded in a “drooped” form. Relatively delicate parts were wrapped in foam on the sprues. Protective sprue ring designs also supported and stabilized more fragile parts. The PE materials are clean and crisply etched, with the grillwork particularly well-represented.

Instructions and Other Materials

A 16-page grayscale instruction manual and a paint and markings color guide on gloss paper are included. There are 20 construction steps describing all kit options. I found careful review of the instructions to be very critical. I chose the bent-leg “25” VX-6 version, but found many photos during research of “25” in both bent-leg and V-leg configurations. High and low exhaust options are not always clearly labeled in the instructions. No specific guidance is given for the other 2 kit options representing “23” of VC-1 and “69” of the JMSDF, both of which appear to be V-leg versions. Furthermore, the many sub-options e.g., blade antennae, conduits, and other neat details were not always clearly associated with one leg type or another. In step 17 some of the blade antennae are to be installed, yet the part numbers are on the not-used list. In step 16, parts K12 and K11 are shown as an assembly, but I was unable to determine where they are to be included on the model. Tundra/snow boot options are included! You might think of these as helo snowshoes.

I was disappointed to not see any options for the port-side fuel tank shown in the cover art. Some of the kit’s extra parts might be helpful for scratch building the missing tank and pylon. A folded tail option is provided, but the main rotor head doesn’t allow folded or stowed main rotor blade positions.

There is an odd absence of credit or copyright information beyond the title on either the instructions or color painting guide. The painting and marking guide is very nicely illustrated in color for the three versions, one each from VX-6, VC-1 and the JMSDF.

Even though it appears there are some issues with instructions and parts, I found no significant oversights that proper research and planning can’t easily fix. You will want to thoroughly dry-fit and test the whole build as much as possible.

National, unit and stencil decals are provided. The larger decals all show excellent opacity, saturation and registration, and all decals responded well to Microscale decal solutions. I was concerned about putting white decals over international orange, but no fuselage color showed through the decal. The painting and marking guide is excellent, but the location lines are difficult to follow to the correct place on the model, in other words, it was sometimes hard to see where the actual decal should be placed. The VX-6 version I built called for decal # 7 national insignia port and starboard. Only one #7 was on my decal sheet, however the insignia looked too large and I substituted both of the #24 insignia from the VC-1 version. The white stencils were largely illegible. Some of the “step” stencils were crisp, but the majority of the stencils looked like blocky clusters approximating lettering.

The kit is a traditional fuselage-halves design, but with a nice variation. From the engine compartment to the aft bulkhead of the cargo cabin the interior is a modular assembly. The fuselage halves are glued around the completed assembly along with some other interior details. I found this to be a great asset to fitting and assembling parts. I believe that super detailing and adding other features will be much more effective and enjoyable with the modular assembly. I lightly glued all the interior bulkheads and parts together before final assembly, which allowed a bit of flex for tweaking everything into position and final glue-up.

The main rotor transmission housing in step 5 did not seem particularly strong. I drilled out the shaft hole and inserted brass tubing, telescoped with brass tubing that replaced the rotor shaft.

I was struck by the light passing through the grills or screens wrapping over the top of the fuselage just forward of the canopy in photos of the actual “25” of VX-6. The grills allow air circulation for engine cooling. PE parts 44 and 43 fit over fuselage openings that allow light through, but the upper grills where PE parts 37, 38, 45 and 46 are attached have solid plastic beneath. Previous reviewers of this kit series suggested that cutting out the underlying panels might give a nice effect. I did follow this suggestion by drilling out the edges of the openings, trimming and filing, leaving a ledge for the PE grill to sit. I used the extra fuselage halves as bending jigs to curve the PE to the correct shape. I found the brass soft enough to form using these de facto jigs without heat treating. Abundant light shows through the installed grills, allowing the cooling fan on the engine to be visible. I am very pleased with the results, since nothing extra was required, only simply cutting out the plastic beneath the panels.

I chose to fold the tail, and I will modify the main rotor to a stowed configuration later. The extra fuselage halves will be pressed back into service to scratch build the blade clamps, the arms that secure the folded-back blades to the fuselage. Fortunately the part fit is quite snug on the rotor blades and required no glue, which will allow me to easily disassemble stuff for modification. The tail hinges are stouter than they appear, making a fairly strong final assembly. The landing gear is also stouter than it appears. I left the clamshell nose/engine compartment doors about halfway open to keep the profile narrow.

The parts had minor seams in many cases, but all were easily removed with a sharp hobby blade. The plastic had a good balance of strength and workability without being brittle.

Overall, the assembly was completed without significant problems. The biggest challenges were in researching the instructions to determine which parts to use, etc.

The model was completed in the VX-6 International Orange livery. I had no painting problems, but if you choose to open up the grills as described above, be sure to paint the compartment interior below before attaching the grills. In my reference photos, the interior was the same color as the exterior; therefore there was no real issue with masking. If the interior color of the compartment is different from the exterior, one might be able to gently stuff the compartment with tissue and lightly glue on a grill. After painting the grill could be popped off and the tissue extracted, followed by grill reattachment.

Color research will be needed. Not all paint color callouts on the instructions are identified on the painting guide, but paint equivalents for Mr. Hobby, Vallejo, Model Master, Tamiya, and Humbrol paint lines are listed. Unfortunately, there are no FS equivalents shown. I painted all the interior parts using colors typical for the time in USN aircraft.

I recommend this kit highly. I am very, very pleased with the results! Understanding the instructions thoroughly is important to maximize success. My instruction manual is covered in green ink notes and comments, and looks like a highlighter kaleidoscope of terror. The painting and marking guide isn’t far behind.

I am often finding that many beautiful new kits have instructions that are stunningly clear and crisp, yet not always easy to use. I have no evidence to support the following observation, but I suspect that many kits are being designed in high-end CAD environments linking to CNC machining of molds, with a disconnect between designers and builders. In other words, are the designers proof-building product off the instructions? This questions only supports the sage and timeless advice of reading the instructions before you start, and brings the need to a higher level. A possible example of this disconnect occurs in step 15 with the UH-34 hoist. The exploded perspective drawing of the hoist parts is parallel to the fuselage. Part L27 does not look like a V-bracket similar to L28, but they are both V-brackets. A slight rotation with a mouse on the CAD drawing would make the illustration nearly perfect and much easier to understand and visualize.

Thank you again to MRC and Gallery Models for providing IPMS with this review kit. I value your support of the scale modeling community. Thank you again to the Reviewer Corps, who allow me opportunities to build exciting kits like this one!

Note the blocky stencils in contrast to the step and fuel grade decals.

Decal detail, note only one #7, where two #7s are called for on the marking guide.

Solid panel drill-outs for opening up the grills.

Bent-leg fuselage half with cutout and V-leg as jig for shaping PE grills.

Folded tail on port side.