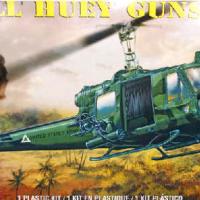 Thanks once again to our friends at Revell for re-releasing the largest static Huey model kit once again and providing IPMS/USA a copy to review! We certainly appreciate the opportunity…

A bit of history: This kit is a re-release of the former Monogram 1/24th UH-1B “Visible Huey.” Originally released in 1970, it is said supposedly to have been a one-time run due to low sales. That’s sad, because it’s a really great kit of a great aircraft, and the operating features actually worked well. I have provided pictures of my built-up visible Huey next to the new release version for those of you who have not seen one. (It is not for sale, and many parts shown are NOT in the review kit….I provide these pictures for comparison only). I’ve seen these go for over $600 as collector items.

Forty years ago, this was the ultimate model to have among aviation fanatics. The rotors were driven by a geared motor in the black base, driving the main rotor (all 21” of it!) while a transfer gear powered the tail rotor through a long nylon shaft threaded into a spring to facilitate the curve of the tail boom mast; this then ran up the front of the tail mast and rotated the tail rotor via gears much as in the actual aircraft. You can see the shaft and gears in the pictures. Included was a sound unit – this was a circular drive that had a spring-loaded piston; when properly assembled, the drive unit spun around on a clear plastic sheet that had a ramp which caused the piston to retract, then thump against the styrene sheet when it passed the ramp. Timed to run at the same speed as the rotors, this assembly adds interesting noise to the gear box, which surprisingly enough DOES sound somewhat like a Huey, just with less turbine whine.

This re-released Bell UH-1B Huey has been modified to make it a standard display model gunship with the early quad-M-6 (four M60 automatic guns) system and seven-shot, 2.75” rocket pods. The kit is molded in olive, clear, silver, and chrome plastic, without the interior motorized stand and nylon drive train. This kit has been re-released at least four times over the past 30 years (Including one “Rambo” version), and here it is again in its HUGE glory. Unfortunately, the rotor gearing is not included, so the rotors are not synchronized to run together. (We don’t play with these, do we?) As the original release was molded in clear, the molds have been highly polished, which means the olive green fuselage side plastic shimmers in the light. Throughout this kit, the fit is excellent. The fuselage halves were originally designed to be assembled with bits of clear tape to facilitate opening the model to provide maintenance on the interior workings if desired.

The cockpit windows locations have been modified to take separate clear window panes instead of being integrally molded with the fuselage sides; this actually makes some of the painting easier, as you can leave the windows out while painting the interior neutral gray. Same for the overhead cabin windows, which need to have a coat of clear green painted on the interior.

Basic cabin detail is excellent, with a legible decal for the instruments. Collective and cyclic control sticks are well done, and the center console between the front seats looks great with careful painting and drybrushing. Two identical crew members are included to fill the armored seats, which are mounted on simulated spring rails; these pilots are a bit too large (big bruisers for pilots, almost 1/20th scale) but will look ok if you are hanging the model from the ceiling. The rudder pedals have “BELL” relief engraved on them, as do the real items, and the radio compartment in the nose is filled with boxes that cannot be seen except through the lightening holes when complete. They eliminate the “see through” look quite well.

Speaking of ceilings, the cabin interior does not have any soundproof padding on the top or side cabin stanchions. I used the aft bulkhead as a pattern, placing strips of heating duct aluminum tape down and burnishing with a q-tip. This is then removed and installed on the cabin ceiling from the inside. It looks a lot better, and if I were doing another of these anytime soon I’d make new cabin interior stanchions and ceiling parts. The overhead switch panel and rotor brake lever are also missing from the top of the cabin; these were not in the original release, so it’s just as well. “Make your own” still works, same for the gunsight, fire extinguishers, and first aid kits prevalent on all Huey interiors, but these are minor omissions that can be fixed with a good spares box and some scratch building. The cabin web seats and seat back are simple and, with careful painting, look fine.

The next step is for the engine and transmission, mounted to the aft bulkhead and other cabin aft structures. Most of these parts are chrome plated; I took these outside to my garage sink, sprayed the parts with Easy OFF Oven Cleaner, and, in five minutes, the chrome washed off in water to reveal shiny dark aluminum plastic. (Do NOT do this next to your car!) I then painted these parts with Tamiya bare metal after they had been assembled and had the seams cleaned up.

Revell’s rotor head and transmission system is actually one of the few accurate versions out there for the standard Bell rigid rotor head and swash plate assemblies; it’s extremely different from the “Charley” head on other 1/35th scale kits, and not as clunky as seen on some D/N model kits in that scale. The mass balance rods on the teeter bar have the wishbone braces, and it all fits together in a solid manner. The only issue is the rotor is in a loaded “flying” position; this was done to ensure the original visible Huey motor didn’t provide the operator with a “boom strike,” which is as catastrophic as it sounds. You will have to do some work to put the rotor in the stowed “high nose, low tail” position at rest. The rotor head is very durable, as fits a former operating model.

All the pitch/roll actuating arms and rods are there, up to the swashplate. The engine is well detailed, but you won’t see much of it. If you took the time to cut out the cooling vents and put mesh in the fuselage engine cowl cutouts, the engine would be there like the real thing. Get busy; you know you want to do this… You’ll need to make a drive turbine to close up the turbine exhaust as well, but that’s for another time. The kit has the original air scoop verses the air filter assembly as seen later on many Hueys.

The tail rotor is simple and has positive installation of the pitch linkage; it’s a press fit on the tail rotor drive shaft. Antennas, tail bumper skid, and cabin vent scoops are all there…even door handles!

Take time to cement the skids securely in place because they will be taking the weight. I installed the fuselage gun mount trunnions and let them dry overnight. Painting is easy: olive drab and black. Decals worked perfectly and snuggled right in. Two sets of markings are included, both marked as U.S. Army in Vietnam, 1966. First is the 1st Air Cavalry Division, (“Have Guns Will Travel” and nose art) and the other with the 114th Assault Helicopter Company; this one has many of the white high-visibility markings and stripes painted on the top of the aircraft cabin and rotor blades. The markings on the box top are included in the kit, but the paint scheme is one of the green/black ones, which were not common. I opted for a basic Cav bird without personal markings. Stenciling is all there, legible and accurate; even the “turn/pull” with direction arrow by the door levers is there!

The last items I installed were the M-6 gun system and 2.75” rocket pods; they take a bit of care to install but look convincing, particularly when you thread the ammunition feed chutes in place. Hint: do the feed chutes first, as they are very difficult to install when the pods and guns are in place. The actual gun pairs on this system can be aimed up, down, and slew from side to side; on the model, the up/down function can be incorporated, but then the weapons point all over the place (they are slewed together normally), so I just glued them in the forward position.

All in all, this was a fun, nostalgic build. The basic model is relatively easy to construct, and certainly the gifted among us could have quite a convincing, impressively large, and final result for a contest with a little effort.

Revell is to be commended for re-releasing these older kits; the price is a bargain, and we can replenish our diminishing stashes of “real models”. Thanks again from me to Revell and IPMS/USA!

Love this kit. in the movie rambo: first blood part 2 stallone did not fly this variant. he flew a bell 212/UH1N. so i bought the rambo kit and am planning to build a royal Australian air force (slick) as seen in the Long Tan battle in 1966. I even have the monogram germany release of the kit and plan to build a US Navy TH1L huey with it