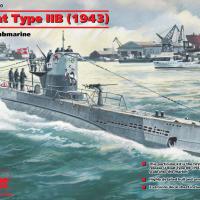 The Type IIB U-Boat was used throughout World War II as a coastal patrol boat, and only twenty were made. Since it could not operate very far from its home port and carried very little armament, it was used to train new crews and prepare new Kapitans for their commands. Surprisingly, most of the Type IIB losses were from the Kapitan scuttling the boat. The first Type IIB was launched on June 29, 1935. It was interesting doing research on the boats that are referred to on the instruction sheet and finding out that markings and specific details of many of the U-boats are not readily available, and in some cases are best guesses.

When I first saw this kit, I got excited because of the 1/144th scale. What a great scale for submarines, especially WWII era. I was still excited when I opened the box and saw how simple everything looked. The more I looked at it, however, the more it looked familiar. Alas, it is the same kit as the Revell of Germany kit in a different box with different instructions and a different decal sheet. The decal sheet was very disappointing because it was badly out of register.

The instruction sheet, typical East European, is very confusing and very vague, with lines going to somewhere near where the part actually goes. Since there are two versions available in the kit, it is difficult trying to determine what parts is need. There are two types of gun mounts provided, but only one of each. One selection requires two of the same mount and two different guns. After my research I decided to model U-23, even though the instruction sheet shows the same type of gun mount on both the deck and the conning tower. Wikipedia says it only had one 20mm gun. U-23 was launched on August 28, 1936, and was commissioned on September 24. It was one of the more successful Type IIB U-boats, sinking or damaging fourteen ships between October 4, 1939, and September 1, 1944. She was scuttled by her crew off the coast of Turkey on September 10, 1944, to prevent her from being captured by advancing Russian troops. She was discovered in 2008 by a Turkish marine engineer in 160 feet of water, along with U-19 and U-20, which had similar fates. The more research I did, the more I found different configurations and markings for U-23, as well as other Type IIB U-boats. So, there may be many arguments as to whether or not my markings are correct.

There are a total of three sprues, all of which are a soft gray plastic with some flash, but not very much. There were no locator pins that caused any problems. Construction was very easy and fairly quick. The only real fit problem I had was the deck-to-hull mating. Even though I had put in several spacers on the inside of the hull along with the kit-provided formers, and dry-fitted several times, there were still some gaps. Nothing insurmountable, however. The conning tower went together well, except for the railing. ICM provides two different types of conning towers, early and late. The railing is very thick and has an oblong profile, but with a little patience will ultimately fit. The same holds true for the deck railing just forward of the con. There are no stanchions or cables for the ship sides, as these would be too fine for plastic. No photo etch is provided. I was going to put on the main rigging using nylon thread, but the more research I did, the more different ways I found of doing it. In the end, I felt more comfortable just leaving it off for an OOB build. A very nice base is supplied with the kit, which completes the display.

The kit gives you two 20mm deck guns, but only gives the hardware for one gun. So, with some fine lead wire, I fabricated the shoulder brackets and the hand wheels. The guns are a little fiddly, but they look okay. There are two of the early gun mounts in the kit, but only one late. My model uses one of each. Who knows, it may have been correct.

All in all, it was a fun build. The decals were the biggest detractor, due to the registry being totally off and being very hard to keep from silvering and to snuggle over the raised ridges. I used the kit decals for the hull markings and conning tower. The Kriegsmarine flags were unusable. I used both Gunze Sanyo and Tamiya acrylics to finish the boat, and Alclad flat to finish it off, and it makes a very nice addition to my collection.

My thanks to MMD-Squadron for providing this excellent product and IPMS USA for allowing me to construct and review it.