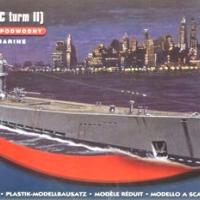 German U-boat U-176 was ordered on 23 December 1939, and had her keel laid on 6 February 1941. She was launched on 12 September 1491, and was commissioned on 15 December in 1941 at Deschimag AG Wesser in Bremen. The boat was lost with all fifty-three hands on 15 May 1943, while on patrol near Havana, sunk by the Cuban patrol boat CS-13 after being spotted by an American OS2U Kingfisher on watch in the area. During the boat’s career, she served under a single commanding officer, Reiner Dierksen, performed training cruises with the fourth flotilla from 15 December 1941 until 31 July 1942, and was the front boat of the tenth flotilla on a cruise beginning 1 August 1942 until her loss. There were eleven ships sunk by U-176 during her career, consisting of 53,307 gross rated tons.

The type IXC U-boats measured 76.76 meters long, 6.76 meters wide, with a draught of 4.67 meters. Two 2500 hp MAN diesel engines could move the boat at speeds of 18.3 knots surfaced or two 500 hp SSW electric motors could propel the boat at 7.3 knots while submerged. The boats were capable of traveling 13,400 nautical miles at ten knots while surfaced, 16,300 nautical miles under diesel/electric power, or 63 nautical miles at 4 knots while submersed. The type could dive to 100 meters maximum, with a calculated critical depth of 200 meters. There were four bow torpedo tubes, and two aft that could fire the twenty-two fish carried onboard. In addition, there was a pair of 20-millimeter guns for anti-aircraft defense, as well as a 105 mm main gun to dispatch wounded ships. The type IXC boats had a crew of 53 consisting of five officers and forty-eight petty officers and other enlisted men.

This new release from Mirage Hobby has some of the best molding detail that I have seen in this scale with very well designed parts, some with incredibly fine moldings. The kit consists of single plastic sprue holding two sets of parts (C and G) with thirty-four individual items along with three loose parts (F); a photo etched fret holding eighteen pieces, a decal sheet, and single-page direction sheet. There are options for the conning tower radar and radio items as well as the propellers and anchor for either plastic or photo-etched. The decks and railings for the two 20 mm guns on the platforms are also a nice touch.

Construction of this kit begins with the base, followed by the conning tower, and then the hull followed by the installation of all of the smaller items. On my sample, I had to do some clean-up on the two halved of the hull as they had some flashing around the upper area where there is supposed to be a ledge for the deck to set in. Fortunately, I found this before joining the hull halves, which made the task easier. There are also no locating pins or holes, so one needs to be careful when aligning the parts for the hull and conning tower.

As a few construction notes, I will also mention that on my kit, I broke one of the G6 parts (rear diving planes) removing it from the sprue, and I had the same experience with a propeller shaft (parts G3). One of my forward dive planes (parts G8) was not fully molded, the directions show the anchor mounted upside down, and part PE6 for the aft, lower 20 mm gun deck and railing has a hole in it, but this does not line up with a raised item on the molded plastic deck. The part attachment points on the kit are a little challenging to see in some spots, and the holes for items like the guns and periscopes will require touching with a small drill bit. The directions for painting the boat at the bottom of the directions call for a green-gray deck, grey conning tower and hull, and black lower hull (with no indication on where one color stops and the other starts).

In building my kit for this review, I decided to use the plastic propellers and anchor over the photo-etched options, as they looked more three dimensional to me. I opted to use stainless steel tubing for the propeller shafts as I previously mentioned breaking one while removing it from the sprue. Although the photoetched loop antenna and radar look nicer than their plastic counterparts do, neither have an appropriate mounting base. I constructed the one for the loop with a piece of plastic rod, and for the radar, I removed that base of the plastic equivalent, and used it. I did quite a bit of research for this build using both my hard-copy references as well as the Internet. I found no photographs of the actual U-176 submarine, so I based my work on boats that were of the same type, and built around the same time. I opted for a light gray (FS 36314) on the upper hull and conning tower, dark gray (FS 36118) for the lower hull, and black (FS 37031) for the decks. I also used a drafting pen to draw in the diesel vents on top of the conning tower, as these were not molded details. My research only mentioned the use of the recommended green-gray deck for Mediterranean operations, where a black tar was used on the wooden decks in the Atlantic.

My hits for this kit are going to have to begin with the overall molding detail, as the folks at Mirage did a fantastic job. The design of the photoetched parts for the 20 mm gun decks was very nice, and having the railings installed is far easier than attaching them later. The photoetched shoulder braces for the 20 mm guns are a nice addition in this scale, and even though I did not install the net cutter on the front of the boat (they were removed early during the war), it was nicely detailed as well.

As far as my misses are concerned, the extra flash on the hull halves, and mold lines on some of the more delicate parts did provide a challenge. The alignment issue that I had with the one 20 mm deck simply required a cut with my modeling knife, but also removed that particular detail for good. I am unsure of how the manufacturer intended for the flag to be installed on the upper deck, but I believe that an opportunity was missed by not making a longer leg on the photo-etched part PE6 that would become the flagpole, as there was a single leg available for this, but it stopped at the railing top. I must also mention that as good as the detail is on this kit, the torpedo tube hatches are noticeably absent, and although the aft ones would be easily missed, the forward ones should certainly be visible.

In conclusion, I would still highly recommend this kit to folks wanting to add a 1/350 scale type IXC U-boat to their collection. There is some work required to make your finished product look good, so I would not suggest building this as your first U-boat, nor would I have an inexperienced modeler attempt this. If you have some experience with building kits, especially German submarines, this is an enjoyable build with a little assistance.

My thanks to the folks at Mirage and Dragon Models USA for the sample kit, to John Noak for allowing me to do the review for the IPMS-USA , and finally to you for taking the time to read this.