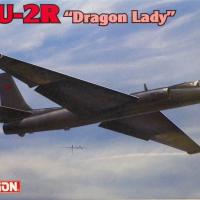 Stemming from a 1953 United States Air Force requirement for a single-seat aircraft to overfly the Soviet Union for photographic reconnaissance at altitudes exceeding 70,000 feet, the U-2 took form under the direction of the legendary aircraft designer Clarence “Kelly” Johnson of Lockheed’s renowned “Skunk Works.” Initially rejected by the Air Force (partly because of the inclusion of the unproven J-73 engine), the concept gained traction with the Central Intelligence Agency in 1954 and prototypes were developed and tested in 1955, using the proven J-57 engine. Eventually accepted into production and service the CIA and USAF, the U-2 became the mainstay of US strategic reconnaissance during the Cold War. By 1966, the size of the U-2 fleet was dwindling from operational losses, and a larger more capable version was developed in the form of the U-2R. The larger, more capable U-2R has seen service since the late 1960’s and remains the mainstay of US manned reconnaissance capability as the re-engined U-2S. Despite attempts to replace the “Dragon Lady” with unmanned aerial vehicles (UAV’s) such as the RQ-4 Global Hawk, the U-2 remains an unmatched resource in American intelligence gathering capability.

Dragon’s release of its U-2R brings fans of the “Dragon Lady” an easy-to-build replica in a scale that actually fits on most shelves. The kit is very simple, consisting of only 3 sprues, 2 in light gray and 1 in clear. Detail is crisp with general proportion and scale appearing to be okay.

Assembly is straightforward, but beware of the instructions (after all, it is a Dragon kit)! The cockpit tub should be installed prior to gluing the forward fuselage halves together, and the “core tube” should be installed with the leading edge notch facing down to accommodate the main landing gear bay. Although exhibiting a “Coke bottle” effect, the slight bulge of the aft fuselage/empennage section pretty much washes out once the flat black finish is applied. Care should also be taken when attaching the wings to ensure sufficient “droop” to allow the wing-mounted outrigger wheels or “pogos” to touch the ground.

The model was finished from a rattle can of Testors Custom Lacquer Gloss Black. The 6 decals went on perfectly using the Micro Scale system, with a top coat of 75/25 Testors Acryl Flat/Future providing the matte finish without the “frosting” inherent to heavy-handed application of straight-up flat finish.

Only a few hours were need to complete the review sample with pleasing results, and I highly recommend Dragon’s U-2 “Dragon Lady” to modelers of any skill level looking for an authentic replica of this legendary “eye in the sky” that doesn’t require a lot of display space.

Many thanks to Dragon USA for the review sample, and to IPMS/USA for the opportunity to do the build and the review.