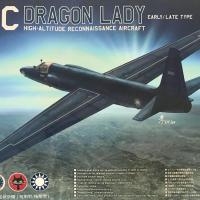 The old Hawk/Testors U-2 kit was first introduced in 1962 and for the past 58 years (yes it has been that long) was the only option available to build this aircraft in 48th scale. Then in the 1990’s we modelers had options of using some resin sets available to make other variants, as well a little more of an accurate detailed kit.

So finally after almost a lifetime, modelers can now rejoice for an all new U-2 kit by AFV Club. Their initial release was of a U-2A Kit #48112 which featured the early design features and markings of the aircraft. Not to disappoint, they followed up that release with the U-2C Dragon Lady and includes all its components to make a C version. Some of the differences between the A and C variants are that the C has different sized intakes, a large dorsal spine, slipper tanks, Type B camera and camera ports, and wing mounted slipper tanks. I also did a comparison between the A and C kits and you can build the A version aircraft from the parts in the C kit. The only difference is the type of the cameras included that’s unique to each kit and of course the decal sheet.

The construction begins with the ejection seat and cockpit which is well detailed, but very basic as is the real aircraft. The kit includes a Type B camera which can be mounted on a maintenance cart or inside the aircraft. Another nice added bonus is a tented canopy that can be placed on top of the aircraft. This can add a great touch for those diorama builders.

The next few steps are of the wheel bays and the intakes. I was initially hesitant about the intakes being broken up into sections but after final assembly you can’t even tell looking into the intake and appears to be seamless. After adding some fuselage compartment bulkheads, cockpit, and gear bays to one side of the fuselage you join fuselage sides together. The matching up of the fuselage halves were spot on and had just needed some minor sanding to blend in the seam.

Your next steps call for doing early or late type intakes installation and landing gear. The kit also allows you the option to build it with its wheels up for those of you wanting to do and in-flight display. Another nice addition is it provides speed brakes which you can pose opened or closed, separate ailerons and flaps that can be put in various positions. There are also options for wing stands or jettisonable wing wheels for your display.

The overall construction of the entire kit was stress free (Individual results may vary). The alignment and fit for all the parts are tight and spot on. I used only a small amount of Mr Surfacer putty on some of the external seams on the intakes, dorsal spine, and slipper tanks. The wing joint fit to the fuselage is excellent and you really don’t have to glue the wings to the fuselage if you want. I can see this being a benefit for storage and transport purposes if you so desire. The decals are possibly the thinnest decals that I have ever used, and great care and patience is needed in placing them.

I really enjoyed building this kit as there was very little fuss in its assembly. I am looking forward in building another one of these as there are some interesting paint schemes out there available. I am also excited that AFV Club just recently announced a U-2D kit as well in the pipeline. I can only hope that maybe down the road they will do a U-2R/TR-1 version. One can dream.

I’d like to thank AFV Club for the review sample and the opportunity to build a great kit. Highly recommended!