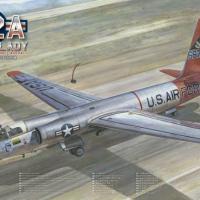 The U-2 is one of those historic planes that many people have heard of whether they are fans of planes or not. From the shooting down of Francis Gary Powers to its long service of gathering intelligence, it has always interested me. AVF Club has issued their first kit of this iconic plane as the U-2A Dragon Lady.

Inside the box, there are eight grey sprues with petit panel lines and no flash, easily the equivalent of top-flight manufacturers. One crystal clear sprue is provided along with a large decal sheet and a nice picture of the box art. There are three options in the box for markings:

The first three planes are natural metal with black glare panels. The AFTC plane also has orange markings and I chose this one for its interesting markings. The last plane is overall Light Blue, FS36473. Color call outs are listed for 6 different paints which is nice.

The three cameras are built next and detail is good with clear lenses. There is a cart included to show the cameras out of the aircraft and moving. I wanted mine on the inside, so I built and decaled the cameras.

The two fuselage landing gear bays are built next and have good detail. The landing gear are wonderful and look spectacular. They are a little delicate and the instructions call to mount them now. I checked through the rest of the build and with a little persuasion, they can be added later. The last part before buttoning up the fuselage is to build the intake ramps and attach them to the engine face. The engine face was painted black and then silver. The intakes have no color call out, so I painted them white.

Next, it’s time to button up the fuselage. Paint all the necessary bulkheads- the front one is the back of the cockpit, the next section is for the cameras and the back is for exhausts. Sadly, there are not color call outs directly, so I painted the camera bay the same as the cameras, the back near the exhaust black and the front to the match the cockpit. Add each bulkhead and check alignment with the other fuselage half. Once done, glue in the cockpit, exhaust and intake (which are keyed but have a tight fit so check multiple times before committing to glue). Lastly, add the cameras and wheel wells. Don’t forget to open any needed holes. The B version has a hump on its back and you must open the needed holes. I added the intakes which fit very well.

To finish the fuselage, Add the back-cockpit part the covers the cameras, The bottom and the clear cover for the cameras. There are two choices; one with smaller windows and one large open window. Check your references. I used the smaller window version. I left of the landing gear doors for later. There are small insert panels that need to be added- Parts G8,9 15 and 16. Fit is excellent on all parts.

The wing builds are straightforward- the ailerons and flaps are separate and position able, but I wanted both neutral. Don’t forget the skids on the tip of the wings. I did leave the wing tip lights off for later.

Since I wanted to do a natural metal finish, I started work on the fuselage before adding the wings. Same with the wings. The leading edges need to be sanded and polished. I used progressively finer and worked on the seams. The fuselage required a small bit of putty near the tail and on the bottom but nothing major. I primed with decanted Tamiya TS-17 Gloss Silver decanted from a spray can. Once happy, I added the wings and they required just a touch of filler. I polished everything up and was almost ready for paint. I added the windscreen and masked it and masked the canopy. I shot these black and the coated the entire plane in the Tamiya lacquer. It took a couple rounds just to get smooth coverage and then I let it dry overnight. I love this paint as it dries rock hard and does not wear off easily. I masked off the red panels and used Testor’s Italian Red (looks better than the FS called for in the instructions). I masked and did the black and yellow on the nose and lastly, I shaded a couple panels with Alclad.

And it was decal time. These decals were superb. Settled in with water only. No silvering, all around excellent. One thing to note- I did cut the large wing walk/markings decals down. When you do a natural metal finish, the decals ruin it so I cut as close as possible and separate the wings walks into multiple parts. They fit better and were easier to apply. I did not overspray them either.

To finish, I added the landing gear and to my sadness, I had snapped the rear gear set. SAC had a set for the old Hawk kit and it filled the bill nicely. Tires and antennae were added along with the ejection seat, speed brakes, and canopy. Lastly, the outrigger struts and wingtip lights.

To display the kit, AFV provides two nice support stands for the wings and a tent/canopy for the cockpit. You can look online and see they kept the cockpit covered with essentially a tent that set on the plane and over the cockpit. AFV did a great job of replicating this for the kit.

This is a wonderful kit. I have seen reviews questioning the shape of the nose, etc. and for my money, they are not noticeable (if even true). I did make two mistakes- the canopy should be white (I have seen both but finally found a picture of this plane and it is white). Second, the rear of the back-landing gear doors should be red. This is by far the best U-2 kit made – great options, great fit and decals, and a lot of fun to build. Go get one- you won’t be disappointed.

Fuselage with camera bay and cockpit