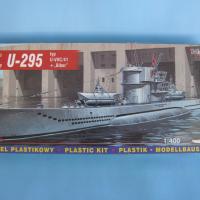 If you are looking for a unique addition to your WWII U-boat collection, let me direct your attention to the kits of Mirage Hobby. In one of their latest releases, the company offers a Type VIIC boat equipped with a pair of Biber mini subs, each carrying a pair of torpedoes. Shying away from the typical 1/700 and 1/350 scales for ships, Mirage Hobby offers this and several other submarines molded in 1/400 scale. Modelers with some experience with small parts will have no issues with the construction of this kit.

The actual U-295 was laid down on 31 December 1942, launched 13 September 1943 in Bremen, and was commissioned just over a month later on 20 October. Initially, the boat trained with the eighth Flotilla in July 1944 before being transferred to the 11thFlotilla in August, and in October transferred to the 13thFlotilla. During her time with the 13thFlotilla, she damaged the frigate HMS Mounsey in November 1944, which would be her lone victory. Her final service was with the 14thFlotilla beginning in April 1945. This boat was specifically used in trials carrying the Biber mini submarines during her time in service. The boat would eventually be surrendered in Narwik and would be sunk during operation Deadlight in December 1945.

Upon opening this kit, the builder will find three sprues molded in gray plastic holding 61 parts, many of which will end up in your spares container if you build the U-295 or U-1305 variant. The instructions and short histories of the aforementioned boats are printed on a single sheet of paper with a small decal sheet stapled to it. No specific paint brands are mentioned, just Grey, Biber Grey, Dark Grey, Wood Color, Dark Green, Dark Brown, and Black. The green is for the Soviet S84 submarine, which was the renamed U-1305 that was claimed as a war prize.

During my construction, I found the pdf file at https://amp.rokket.biz/docs/u-boat_colours_with_photos_5.pdfvery useful. As there is a lot of debate on the actual match for the gray used down to the waterline, I left the Badger Stynylrez Gray primer alone to represent this. The hull below the waterline, and the saddle tanks received Model Master Acryl Engine Gray. Vallejo Brass was used on the tips of the torpedoes and the propellers for the submarine, and the deck was painted with Andrea Black.

As far as my hits are concerned, this is a unique subject, and the scale allows for showing better detail than 1/700 scale. The kit built up reasonably well, with minimal fit issues, making this ideal for most modelers.

I had no significant misses for this kit. I did find some of the moldings, such as the Biber mini subs, to be crisper than others, such as the deck in my sample. I personally would have liked seeing railings included for the gun platforms, and on my sample, the German flag decal broke in several spots as I attempted to fold it for installation.

In conclusion, I would highly recommend this kit to anyone wanting to add this unique submarine to his or her collection, but only if the price is right. Construction will offer minimal issues to builders with some experience adding small parts.

I would like to thank the folks at Mirage Hobby for being gracious enough to provide this kit to the IPMS-USA for review! I also like to thank John Noack and Phil Peterson for their time and efforts in running the Review Corps as well as allowing me to perform this assessment. I also appreciate the folks behind the scenes in the Review Corps who keep the review machine running so well, and finally my most sincere appreciation to all who take the time to read this.