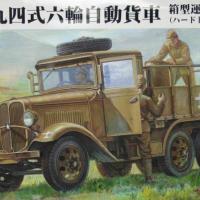 This truck was designed for use by the Japanese military, using mostly parts for civilian vehicles. Production began in 1936 and continued until the end of the war.

The color charts shows the reference numbers for Tamiya, Mr. Hobby, and Mr. Color. The paint scheme is for a khaki-iro. I used Tamiya acrylics and a 50/50 mix of XF49 and XF64 for a dark khaki color. There was no camouflage pattern shown in the instructions.

The decals have only Fine Molds as the manufacturer’s name. They appear to be in register and they went on without any problems.

The build is at an intermediate level with good detail. The molding is a mixed bag with no flash, but with some large visible ejector pin marks and mold lines. The detail in some areas is exemplary. For instance, the outer wall of the cargo bed has tie down hooks with bolt heads that are very detailed. But some areas such as the cab interior are very sparse and somewhat soft in detail. This could be due to the cramped vision lines when the cab is completely finished. I can recommend this kit to all WWII pacific theater modelers.

Thanks to Dragon USA for providing this review kit.

Vehicle left side
Previous Next