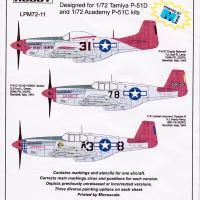 LPS Hobby from Brazil has a new set of 1/72ndscale after-market decals for several P-51 aircraft that were assigned to the famed Tuskegee Airmen. These markings were carried by aircraft while that unit (332ndFighter Group) was stationed at Ramittell, Italy during 1944.

The markings are for:

The decals are printed by Micro Scale, in register, and appropriately thin. The decal placement guide is nicely done and easy to follow with a number of historically correct annotations. Even down to the correct color for the trim tabs on each specific aircraft, a detail that I wasn't aware of prior to getting the set of decals. Another nice touch is the inclusion of a black- or red-lettered ApacheIImoniker for 1Lt. Perry's P-51C, as either would be correct. It should be noted that Apache II had differently sized 'II's' either side of the nose and that detail is included with this release.

The yellow wing bands applied to these P-51's are not provided but the purist would want to paint those on anyway. One nice, historically correct note is the different configurations for the yellow wing stripping amongst the different models (C or D) flown by the Tuskegee Airmen. The P-51D flown by 1Lt. Earl Love sported two yellow wings strips versus the single strip on the P-51C's illustrated.

Apart from the accuracy and nice detail provided with this set of after-market decals is that they come packaged in a zip-lock bag that is larger than the instruction sheet. No more fumbling with trying to get a same sized sheet out of a same sized zip-lock bag. Obrigado!

The Tamiya P-51D or Academy P-51C are the recommended kits for these after-market decals but there is no reason to believe that they wouldn't work just fine with another manufacturers kit. For fans of the Tuskegee Mustangs, every marking that you could wish for to model an accurately marked 1/72ndscale Red Tailed Mustang is included with this decal set from LPS Hobby.

My thanks to LPS Hobby and IPMS/USA for the review copy.