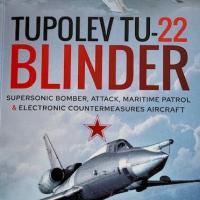 With both engines mounted astride the vertical stabilizer, the supersonic Tu-22 Blinder was unique among modern bombers. It entered Soviet Air Force service during the height of the Cold War in 1961 and was a contemporary of the USAF’s B-58 Hustler. Though a direct comparison between the two aircraft is close to the “apples and oranges” conundrum, the Tu-22 was not as fast as the B-58 but was more versatile. In addition to its conventional and nuclear bombing capabilities, it could fly reconnaissance, anti-shipping, and radar and comm jamming (ECM) missions.

The book was first published in 2005 and this volume is a reprinted soft-cover version. Burdin and Dawes (who is also the translator) document the development, system design, operations, and combat experience of this bomber. Below are the Chapter headings which show the scope of the coverage.

Details of its construction, weapon systems, photo-reconnaissance and jamming equipment are included and cover all variant models. In many instances, the explanations are very detailed and read almost like a pilot’s manual. The chapters on its use in Afghanistan were quite interesting. The Tu-22 was a complicated machine and very advanced for its time. Consequently, the bomber was a demanding aircraft to fly and its operational service was punctuated with numerous accidents. The chapter on “Incidents” is 36 pages long with information from official and unofficial reports, as well as from the crew members themselves. It makes for somber reading.

Overall, I enjoyed reading this book about an aircraft I want to model. I found it particularly interesting since the aircraft was a follow-on to the “conventional” Tu-16 and laid the foundation for the more advanced Tu-22M3 and Tu-160. However, the book is aimed primarily at the historian, rather than the modeler. All the photos are vintage Black & White and were provided by crew members who actually flew the aircraft. Although there are some close-ups of seats and landing gear, as well as a couple of instrument panel drawings, most pictures are of the entire aircraft. I would highly recommend this book to those interested the Tu-22 itself or Soviet aviation during the Cold War in general. My thanks go to Pen & Sword Books Ltd. for providing the book for review and to IPMS for the chance to review it.