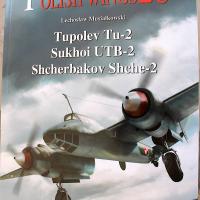 This book gives a very detailed history of three Russian designed aircraft that were used in quantity by the Polish Air Force, mostly after the end of World War II. The first aircraft, the Tupolev TU-2, was used in quantity by Poland, mainly for medium bombing, and later as a reconnaissance type, trainer, and target tug. The author goes into considerable detail giving an account of the design origins of the type and its service with the Russians before the Polish Air Force acquired them after the war. An interesting fact is that Tupolev began the design of the TU-2 before the outbreak of the war, and apparently he had run afoul of the Communist Party ideology. His design team was forced to work in a Soviet prison camp from 1939 until 1941, when they were finally rewarded for their success by early release from prison. During the war, several variants of the TU-2 were produced, and the plane served effectively during the war, with the TU-2S variant being the type that was exported to Poland after the war entering service in 1949. The TU-2S was used in several roles during its service career, by both the Polish Air Force and Navy, its career ending when they were replaced by the Soviet Ilyushin IL-28 Beagle jet bomber.

The TU-2S was a very effective aircraft in the hands of both Russians and Poles, but training crews was another matter. Towards the end of the war, Tupolov was heavily occupied developing a copy of the Boeing B-29, as several had landed in Russian territory after raids on Japan, and the Russians couldn’t bring themselves to be honest and return the aircraft. Instead they kept the planes, and the crews, and had the nerve to charge the Americans for their room and board while they were held prisoner. Of course they used the B-29’s to copy the airframes so they could develop a strategic bomber, since they had not developed the technology to build one on their own. The result looks almost exactly like a B-29. So when they were asked to develop a specialized trainer variant of the TU-2 they were too occupied with the B-29’s, so the task was passed on to Sukhoi who developed the trainer, designated UTB-2.

The UTB-2 was basically similar to the TU-2, although it was basically simplified, with 700 hp, radial engines replacing the 1600 to 1800 hp. radials that powered the TU-2, along with two bladed props. Internal arrangements differed, the goal being to produce a plane that would be ideal for training pilots and aircrews. This was a postwar design, and the type entered service with the Soviet and Polish air forces in the late forties. The type was used for a number of years, being finally retired in 1956. Unfortunately, all of them were scrapped, and none survives today.

One problem that the Russians had during the war was the lack of a light transport aircraft capable of carrying crews and aircraft components to frontline airfields. The Soviet-built Li-2, actually a DC-3 airliner built under license, was a little large for the role, and the Polikarpov PO-2 two seat bi-plane, of which over 30,000 were built, wasn’t quite large enough to carry engines and heavy parts. Yakovlev built a small light transport during this time period, but they were occupied with fighter production, and couldn’t devote the time to designing this type of aircraft. In 1941, the Shcherbakov Design Bureau began work on a light transport to fill the need of the Air Force. Originally they intended to use a pair of German 240 hp. Argus engines, but when they found that they weren’t available in the numbers the Russians were interested in, the only alternative was to use the much smaller Shvetsov M-11D air-cooled radial engines used on the Polikarpov Po-2 biplane trainer. This meant that the Shche-2 would be almost dangerously underpowered, and a total of only 567 Shche-2’s was built during the war, production ending in 1946. The aircraft was built of non-strategic materials, and a trainer version was also developed. Polish pilots began training in the aircraft in 1944, and the first ones reached the Polish military in 1945, just at the end of the war. The Poles used the aircraft primarily for training, but they were also used to train parachutists. After the war, training operations resulted in a high accident rate, and the last one survived until 1947. Unfortunately, none has survived.

The book presents a very detailed history of the three aircraft types, especially as they were used by the Polish Air Force. Although there are no three-view line drawings of the types, which would be useful, there are excellent black and white photos, and numerous side, top, and bottom color views of the aircraft which accompany the black and white photos. There is easily enough information presented to build models of the Tupolev bombers and trainers, and probably enough to build a scratch-built model of the Shche-2 light transport. There are several kits of the TU-2, notably one by Hobby Boss in 1/72 scale, and this could probably be used as a basis of conversion to the trainer variant, although the conversion would most likely be fairly complicated. There is not, to my knowledge, a kit produced by anyone of the Shche-2 aircraft, but after this book hits the market, I wouldn’t be surprised if one suddenly appears. One can hope.

This book is rather typical of the high-quality publications that are being produced by Eastern European companies. There is a lot of information that has not been published before, and I can highly recommend this book to anyone interested in this fascinating period of aviation history. Don’t miss out on this one.

Thanks to Casemate Publishers and Phil Peterson for the review copy.