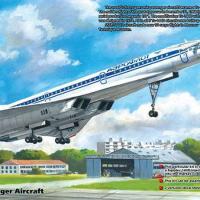 The Tu-144 was quite a special aircraft. It was the first supersonic passenger plane to fly, beating the Concorde by two months. The Concorde was scheduled to fly first, but ran into some developmental problems which delayed the flight. Tupolev was pressured into flying their aircraft first, in spite of problems, giving the Soviet Union a huge propaganda boost and showing the superiority of the Communist system.

There were only 16 Tu-144s built: two prototypes, nine Tu-144S and five Tu-144D, compared to 20 Concordes. In the 1960s, there was great expectation that large fleets of supersonic airliners would be seen around the globe. One of the contributing factors that made this impractical was the global energy crisis of the early 1970s, when OPEC embargoed crude oil to most countries. The resulting high cost of operation made jumbo jets a much better financial deal for the airlines, with a much lower cost per mile per passenger.

The Tu-144 was never as popular as the Concorde, especially after one crashed at the 1973 Paris Air Show. There were other problems, particularly the method of building the 144. Fuselage sections were machined from large blocks and panels, and there was no stopping a crack in the fuselage once it started. This resulted in several emergencies and crashes.

Aeroflot passenger service began in November of 1977. In June of 1978, with only 55 passenger flights, airline service was terminated. The Tu-144 was used by Aeroflot as a freighter for a short time, but there were only 57 more flights before Aeroflot retired the Tu-144.

One example was leased by NASA in 1995 for use in testing the feasibility of a high-speed transport. There were 27 flights in 1996 and 1997. The project ended in 1999 when funding was terminated.

The big difference between the Tu-114S and Tu-114D was the engines. The earlier S had afterburning turbofan engines, which didn’t have enough thrust to maintain Mach 2 without afterburner. The Tu-144D used Kolesov RD-36 turbojets, which allowed Mach 2 cruise and much longer range.

This is a large model which comes in a large box. Because of the engine change, the Tu-144D has a different engine configuration from the earlier ICM kit of the Tu-144. So there’s some surgery required. You have to cut down the length of the nacelles at the rear of the aircraft. I lucked out here for some of these cuts, as I have a tool called “The Chopper”, which is used by model railroaders for cutting rails, ties, and anything else which needs to be cleanly cut in a straight line.

When I began the assembly of the fuselage, nacelle, and wing assemblies, I was very impressed with the highly precise molding done by ICM in this kit. The fuselage halves required only a little scraping, and the fuselage-to-wing joint required no filler at all. The fit was amazingly tight all along these long parts. There was no flash, no warp, no departure from the exact lines needed to get the parts to fit cleanly and exactly.

When I got the fuselage, nacelles, and wing assemblies together, I discovered that I had gotten ahead of the game. The ailerons at the rear of the delta wing are separate parts, and have tiny little extensions which are static electricity dispersers. I should have left these parts off until after all the handling, as I managed to destroy almost all of these during handling. Fortunately I didn’t install the rudder until very late, and its extensions survived intact.

Although I had already painted the fuselage halves and installed the windows, it was necessary to mask the windows while I used the Reefer White on the fuselage top (which I had to scrape) and the tops of the wings. The underside was painted with Testors Flanker Gray and Titanium Metalizer. I had some difficulty getting the Titanium area masked, and there’s a place where the gray underside comes to a point right at the radome, which required some effort to mask, and some fixing later. Once I got this done, I applied a couple of coats of Future, as the Reefer white is dead flat, and that large area requires a goodly amount of gloss coat. And it was ready for decals.

I started with the identifying markings under the wings. I decided to do CCCP 77115. The choices are 77115 and 77112. The CCCP went on OK, but the numbers split as I was putting the decal on the wing surface. OK, I can deal with that. Next I did the Soviet flag on the tail and the ID numbers. The flags went on fine, one of the numbers broke during positioning. Still manageable. I let these decals set up overnight, wanting them to be firmly set before I started handling the plane again.

Then I started the side stripes which have clear spots which match the windows. And I discovered that there’s no decal film for those windows. Each of these decals is about two to four inches long. Each of those decals broke in two or three spots, right at a window. I persevered for three of these stripes and a couple of doors before I figured out I had a problem that could be solved by technology. I left the decals that were already on in place, and applied Micro Scale Decal Film to all of the remaining decals. Problem solved.

Decals still took four days because I didn’t want to screw up the decals I’d applied with an errant finger. After all of the markings were done, I applied another coat of Future, and I was ready for the fiddly bits.

I always leave the landing gear, both legs and doors, and all the small parts until after I finish decals. This is because I become task fixated, and will knock those parts off anyway, so why bother putting them on only to have to repair/reinstall?

The landing gear legs and the axle assemblies were really nice. The instructions call for an angle of 85 degrees for the gear legs, and when you put the legs on the axle, they naturally fall to the correct angle. Again, some superior engineering.

While installing the wheels, I also learned that the plastic doesn’t respond well to Tamiya Extra-Thin Cement. Tenax worked well, however. I used CA to install the gear legs and gear doors.

I was more than pleased when all 16 main wheels sat exactly on the ground, first try. The engineers give, they take away.

I had left the droop nose off until next to last. I did the glass part, and then painted the anti-glare panel on top of the clear part. I went to www.airliners.net and did a search for photos of the Tu-144. And I learned something. Besides the engines, I learned that there’s another noticeable difference between the S and D sub-models. The Ds have tinted glass in the droop windows. I used a “rust” wash to get the reddish tint.

Recommended. This airliner sits next to a Concorde like a B-52 sits next to a B-47. The fit of the main parts is SO nice. The necessity of cutting the engine nacelles does make this somewhat more of a project for the experienced masochist. The other ICM kit of the Tu-144 doesn’t require that this be done. The decal problem is eminently fixable, and there weren’t any show-stopper problems. The instructions were pretty good, although there were a couple of places where I had to test fit before I believed I had it right. On the other hand, there was no time when I used the Wild Weasel YGBSM motto. I spent 4 weeks on this kit, working just about every day, and it was well worth the time and effort.

Thanks to ICM, MMD/Squadron, IPMS/USA, and Steve Collins for a really interesting addition to the airliner shelf.