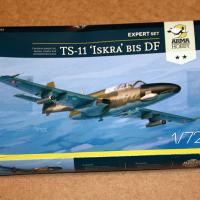 The PZL TS-11 Iskra (English: Spark) is a Polish jet trainer aircraft, used by the air forces of Poland and India. It is notable as the main training aircraft of the Polish Air Force, and as the oldest jet aircraft still in service in Poland.

The aircraft was designed in response to a Polish Air Force requirement for a jet trainer. The main designer was Tadeusz Sołtyk - hence a designation letters TS. The new aircraft was the first jet aircraft designed in Poland. Work started in 1957, the first prototype powered by an imported British Armstrong Siddeley Viper 8 of 7.80 kN (1,750 lbf) was flown on 5 February 1960. The next two prototypes, with a Polish copy of the Viper engine named the WSK HO-10 engine were flown in March and July 1961. The new Aircraft fulfilled requirements and, after tests, was accepted for the Polish Air Force as the TS-11 Iskra bis A, produced since 1963.

Arma Hobby, a Polish maker of scale model kits, produces the kit. The kit arrives in a very colorful box with artwork of a TS-11 displayed in a banking turn on the top. The bottom of the box shows 2 TS-11 in colorful schemes in use by Poland.

The kit consists of approximately 68 parts and comes on two grey sprues, and one clear sprue for the canopy. There is also one photo etch sprue for the seat belts and finer details for the cockpit and external features. Also included is a set of masks for the canopy (a nice touch) and one sheet of decals for two color schemes. Also included is an acetate sheet with the cockpit instruments nicely printed. The parts are nicely molded, with no flash, fine panel lines, and small sprue gates. The 8 page instruction sheets show the suggested assembly through 16 steps starting with the cockpit assembly and progressing through fuselage, assembly of wings and tail planes to fuselage, and final parts assembly.

The kit fits together very nicely! There are positive assembly locators on all of the parts but care must still be taken when gluing the parts together. The first step is the assembly of the ejection seats and the addition of the PE seat belts. They look great when finished. The instrument panels consist of clear acetate with pre-printed gauges sandwiched between the rear panel and a photo etched instrument panel outline. It also looks great when installed. The cockpit side panels are attached to the floor. To use the photo etch side panels I had to remove the pre-molded cockpit details and attach the photo etched panels and smaller PE pieces. After painting and dry brushing the panels look great. Next the cockpit tub is installed in one half of the fuselage as well as the engine exhaust and then the other fuselage half is glued to it. Next the wings are assembled. I found that the bottom half is a little thick and needed to be thinned before the two half’s are glued together. A nice option is that if you want the aircraft displayed with the flaps down they are provided. You will first need to remove the flaps up as molded into the wings. I did not add the flaps down option. Next the wings, elevator and tail fin are attached as well the external fuselage details. Last are the landing gear, canopy, and ordinance. There are masks provided for the canopy, which work well.

I purchased the recommended acrylic paint set HATAKA A546 so that I would have the correct colors for the Polish NATO bird. I first primed the aircraft with Tamiya fine primer. The HATAKA paint set comes in (6) 17 mL dropper bottles and goes on thin straight from the bottle.

I then used chalk pastels to highlight the fine detail of the ribbing in the fuselauge, wing, rudder, elevator, and panel lines.

Overall the kit is a joy to build and builds into a nice TS-11 Iskra aircraft. The fine panel lines and the detail are exceptional for a kit of this scale. The nice touches that are included in this EXPERT KIT are the photo etched sheet, acetate sheet of cockpit gauges, and the canopy masks.

My thanks to Arma Hobby and IPMS USA for the opportunity to build a kit from a company I had not previously built a kit from. I look forward to building more Arma Hobby kits in the future.