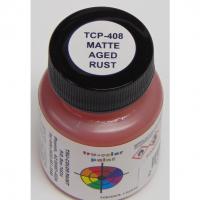 I am 57 and as I write this and like many I have mourned and am mourning the demise of hobby paints thanks to Rustoleum. I remember many good paint lines that have come and gone and many due to consolidation under Testors and later Rustoleum, Names like Model Master, Testors, Floquil, Polly S and Pactra to name some. I am more of an Enamel and Lacquer based paint user than acrylic; but have also done my fair of painting with acrylics. There are a lot of other paints available – Gunze Sanyo, Tamiya, AK Interactive, Mig, and Vallejo, but like most modelers I am a creature of habit and change is hard. So, as I have watched a multitude of railroad, naval and now military colors go away, and am faced with change. I jumped at an opportunity to try a new line of paint that has more bite than standard acrylics.

In fairness to Tru-Color they have been on the scene for some years now and continue to expand their product lines. I am not the first reviewed in IPMS to sample their products, but I share my experience using the paint in a build. I requested and received 4 bottles of paint, two of which I used in a build of the AFV Club 1/350 LST-1. The paints I received:

I used Matt Dark Rust and Matt Aged Tar in my build of the LST kit. I found the Dark Rust to be a good match for the brownish red anti-fouling found on some U.S. ships during WWII. The Aged Tar was a good for the black boot topping.

These are solvent based acrylic paints which use a small percentage of acetone in its blended base, which gives them more bite than water-based acrylics. The paints are airbrush ready and as I confirmed, not suitable for brushing. If you find with time you need to thin the paint, Tru-Color recommends their thinner TCP-015 or TCP-310 Retarder, since straight acetone is too strong and will alter the formulation. But straight acetone is great for clean up thoroughly removing the paint. Tru-color paints can be mixed for differing shades or fading but cannot be mixed with other brands of paints.

In my application, I applied the colors directly onto the plastic without primers. I did clean the plastic to remove any mold release or body oils since we all fondle our plastic! I used a both a single action and double action brush straight from the bottle at the recommended pressure of 28-35 PSI. I like to shoot around 25 PSI, so this was not real adjustment for me. I kept the flow low to mist on coats. I found the Dark Rust flowed easily and provided good coverage after several light coats. The Aged Tar was a little thicker and could have used a little thinner or retarder. Still I achieved good results.

After spraying the Dark Rust, I let it sit for several days. I also shot a test wing to more fully abuse. The paint did not pull up after masking with a les adhesive tape. On my test wing I used harsher tape and still it did not pull. After masking and painting the boot topping on the hull, I painted with Model Master Acryl for the upper hull. After several days of curing I did have some pull up of Model Master Acryl, but not Tru-Color. I was totally satisfied with Tru-color in this application.

While acetone takes a bit of getting used to, it did thoroughly clean my brushes. The high evaporation rate meant I could quickly shift the air brush to another solvent.

Since I did not use the Yellow Doped Linen and Matt Rail Brown, I am providing color chips for the reader.

I really like this paint and plan to acquire more in the future. Strongly recommended.