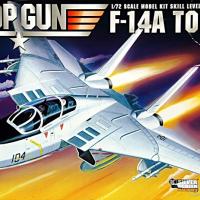 The F-14A fighter was designed because of the failure of the F-111B and the lack of its fighter capabilities, weight, and rear visibility. It was a fourth generation, supersonic, two seat, twin engine, variable- sweep wing aircraft. It was designed using the lessons learned about fighting Migs during the Vietnam War. They took the TF30 engines, AWG-9 radar and the AIM-54 missile system from the F-111B and designed a more capable fighter aircraft. It first flew in 1970 aboard the USS Enterprise.

This kit is put out by Round 2 which is re-releasing older kits from Polar Lights, MPC and, AMT. It makes me really happy to know that I’ll be able to find some of the older kits from my childhood at more reasonable prices than the originals that are found on Ebay. Thanks for all your efforts Round 2, they are appreciated. One thing to remember about these older kits is that the molds are older and there can be a lot of flash to scrape off of the parts.

The kit consists of 93 parts on 6 sprues molded in grey, 1 clear sprue, 6 page instruction sheet, decal sheet, and a double sided decal placement sheet printed in color. The only disappointment I had was that the box has all of these nice pictures from the Topgun movie but when you open the box you have the same model and decal options from AMTs’ other F-14A kit AMT802/12. They did add the pilots’ names, from the movie, to the right side of the decal sheet. This also includes the aggressor pilots that didn’t fly F-14s. Other than this, it is still the exact same kit as the earlier F-14A release.

There are 2 decal options for this kit. Both are high visibility paint schemes.

Building this kit was pretty straight forward and the instructions were very clear. The best part about this kit is that they have a wing mechanism that actually works. Now you don’t have to decide early on whether or not you want the wings open or closed. On most other versions it is either one or the other. Once cleaned up the parts did fit well and only needed a little bit of putty. There are some weapons options included as well, AIM-9C Sidewinder, AIM-7F Sparrow, and AIM-54 Phoenix. Also they include a TARPS unit (Tactical Air Reconnaissance Pod System).From my research I found that this version of the F-14 didn’t use this system, but it’s nice to have in the spares box for future use.

The color call out on the decal and paint sheet is pretty generic. With 3 of the main colors having FS numbers. This really helped me out when I applied the decals because the Insignia red (FS 31136) was spot on with the decal color and you can’t tell where I had to use it for repairs. This brings me to the decals. I did have a little trouble with them. A couple of them did rip on me. Other than that, they worked very well and reacted well with Micro Set and Micro Sol. I’m pretty sure that the only problem with these decals was me and not the decals. I was just really happy that the red paint they called for was able to make the rips unnoticeable. For the cockpit consoles they included decals of the instruments. I think that these look great when installed and they fit the parts only needing a small amount of trimming. For painting the upper side of the aircraft I used grey FS 36440 and for the underside I used Floquil reefer white.

In conclusion I think that this kit makes a nice representation of an F-14A. It has more straight forward assemblies making it great for less experienced modelers and would be good for a father/son type of build where you could teach basic modeling skills. Just remember that it is an older mold and needs just a little more clean up. I was very happy with the results in the end and it now sits with my other modern naval aircraft.

Thanks to Round 2 Models and IPMS USA for the opportunity to do this review and I would like to add that I can’t wait to see what else Round 2 is going to be coming out with next.