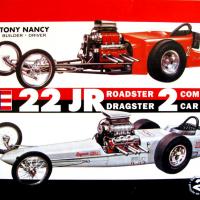 If, as a builder, you are interested in nostalgia, or are fascinated by early organized drag racing, then Revell has come through for you with the re-release of this classic Tony Nancy set of dragsters. First released in 1963, and with the date still showing up in the moldings, this kit represents the dragster and roadster that won the Competition Eliminator (the ’23 “T” Roadster) and Best Engineered Car (the Dragster) awards at the Winternationals in 1963. Tony Nancy, whose nickname was "The Loner" based on his ability to practically field a car by himself, set at least one record or Drag News 1320 mark in every class in which he competed, which encompassed cars such as a V/Fuel Dragster in 1957 through Top Fuel, where he held the national speed record at 236.22 in 1971. He was well known both for his seahorse emblem and for his upholstery business which served many Hollywood stars (such as Steve McQueen and Clint Eastwood), and working on boats and a variety of automobiles. Sadly, Mr. Nancy passed away on November 11, 2004, after a prolonged illness.

Upon opening this kit, you will find four sprues molded in a smooth, silver plastic, a single chrome sprue, two small clear sprues, rubber tires for both vehicles (the front and back are identical for both), two metal axles, a small decal sheet, and a twelve-page instruction guide. I really appreciated the racing slicks for the cars, as I have not seen these done as single moldings in some time. If you have read other reviews that I have written for the IPMS, you now realize that I build pretty much anything. I started with cars in my early days of building, but since I moved on to aircraft and armor subjects, I have not ventured back to my roots very often. As this year actually marks my fortieth year of modeling, it did feel good to get back to where it all began with this review.

The instructions for this kit begin with a short write-up on Tony Nancy and the racing vehicles represented in this kit, followed on page 2 by a listing of the eight colors that the modeler will need. Something rarely seen these days is the parts description contained on pages three and four, as these descriptions were how I first learned the names of the various engine components back in the day. Pages five through eight then describe the construction of the Dragster from start to finish, while the Roadster directions run from page nine through page twelve. The construction is straight forward, but as one would expect in an older kit, there was some flash present on all of the moldings, and some of the fits were not nearly as tight as one would expect on a more recent release. I will also mention that nearly any kit that I have built in the past several years will typically have parts laid out on the sprues either in what I would call a logical order (all engine parts being near each other for example), or a numerical order (part one is next to part two, which is next to part three, and so on). This older release has parts scattered across the sprues, and the chrome parts, mostly identical for both vehicles, are contained on a shared sprue. In short, plan on spending some of your build time just looking across the sprues to find the items that you need as they are called out.

As far as my hits of this kit are concerned, I have to say that the assembly was mostly easy and the instructions are very easy to follow. Having an appreciation for the quarter-mile racers, I also enjoyed that aspect of this kit which contains two vehicles of a racing legend. Looking at the photographs that I found on line, Revell did a great job back in 1963 of capturing the lines of these vehicles, and they are still something that can be fun to build today.

As far as my misses, there are a couple of mistakes in the directions that I found. In step 1 for the Dragster, one cylinder head is shown as red, the other as aluminum (both should be red). In addition, the exhaust stacks are shown as part number 122 on both sides, where they are in fact part 22. For the Roadster, the blower halves are shown as being chrome in the directions, but they are not on the chrome sprue. If building the Dragster per the directions so that the upper body panels can be removed, understand that they do not fit tightly.

In conclusion, I would recommend this kit to anyone who enjoys the older racing vehicles used in the early NHRA events. I, for one, enjoy seeing some of the older kits re-released as I missed them when they first came out, and also when they were given a second life. As I started out this review, I will again say that if you are appreciative of nostalgia, this will be a great kit for you.

My thanks go out to the folks at Revell for providing this kit to the IPMS-USA for review, to Steve Collins who runs the Review Corps and allowed me to appraise this kit, and to you for taking the time to read my comments.