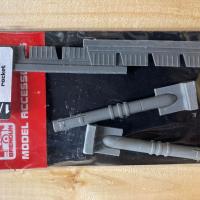 Brengun/Hauler provides the modeling community with items considered perfect for limited run production. In this case, who would have thought the much-vaunted but not really that effective unguided rocket weapon, affectionately called “Tiny Tim”, would end up as an available add-on?

A logical development of 5” unguided rockets employed by Navy and Marine aircraft in the later portion of the Pacific war, Tiny Tim was essentially a standoff-penetration weapon attached to a rocket tube, designed to be used against bunkers or ships. (Supposedly the rocket body was manufactured by tubing used in oil field work, if you believe wiki). The weapon was aimed, dropped like a bomb, and a lanyard fired the rocket motor when it cleared the aircraft. Accuracy was, as expected, questionable, but must have been very testosterone-inducing for the pilot when the weapon was fired.

The Brengun model contains parts to assemble two weapons; a body with recesses for the tight-fitting set of four individual fins. The rocket nozzle is faithfully presented in place, (No brass superglue-filled holes, yay!) , and the fins replicate the folded and welded stamped metal of the original engraved on the outer edge of the fin.

Using thin superglue and a wicking nozzle, I had one rocket assembled in five minutes. Detail is impressive, and the mounting bands are accurately depicted. I intend to hang these off my 1/48 Skyshark when all is said and done. I have seen these painted gray, with black nose, olive drab overall, or black. You get to do your own research for YOUR use!

Thanks to the crew at Brengun for the review sample; this is another example of their ever expanding line of unique and useful projects, and thanks to the IPMS leadership for providing it for me to review!