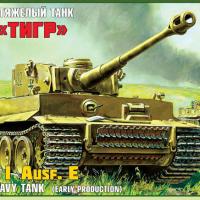 The heavy tank Panzer VI was designed in 1942 by the Henschel Company in response to the heavy Russian tank (KV-1) encountered on the Russian front. It mounted a tank version of the Flak 36 88mm canon and had 100mm of frontal armor. The Tiger remained in production and front line use until the end of the war. It became know as the Tiger I after the Tiger II entered combat in late 1944.

Zvezda’s newest kit is the first production model of the Tiger, the Ausf (model) E, which was introduced at the Battle of Kursk and used in North Africa and the Italian campaign. The first thing I noticed is that the sprues are not clearly marked on the front with a letter; the letter is small and on the back of the sprues. I wrote the letters onto the front to help in construction. There are four sprues of yellow plastic, one clear sprue, and vinyl two-piece tracks. No photo etched or metal parts.

The assembly starts with a fully detailed turret interior, but there is no hull interior. This detail is quite extensive and takes up the first five steps. Not much is visual thought the hatches, but I have seen where you can leave the top of the turret unglued and take it off to display. You also have to decide at this time what version to build, with the hatches closed or open. This only affects construction a few times, mainly when installing the hatches and their interior details.

The only real fit problem I encountered was with part C54, the inter-hull bracing between the driver’s compartment and the hull under the turret. This prevents the upper hull top from mounting flush with the sides of the hull. I had to break it back out and just trash it. It is not seen and was not needed to brace the upper hull. Another part that I left off was part B19, a ring that locked the turret to the hull, since I like to paint the hull and turret separately. The turret will still fit on the hull, but is a little loose, really no big deal.

The barrel comes in two pieces, something I truly dislike. I did get an RB Models replacement metal barrel for a Tamiya Tiger and this fit great without any kit modification. This kit is missing engine screens, so I got the Tamiya screens and those fit great, also. The four hull-mounted smoke dischargers need to be drilled out, as do the machine guns.

Another choice of versions comes up when deciding to mount extra track links on the side of the turret and the smoke dischargers. The two paint schemes are a solid desert yellow without these and a camoflage of yellow and red-brown with them. This also affects which decals to use, the black numbers for the solid and the white numbers for the camouflage. I decided to add them, camouflage the Tiger with yellow and red-brown, and use the white decals.

The vinyl tracks are much like Tamiya’s older ones; they are nicely detailed but did not hold paint very well. I used an acrylic primer and I think I needed to use a lacquer-based primer to get a good bite into this vinyl.

The overall construction of the Tiger was not very difficult or time consuming, like a Dragon or Bronco kit. With a few added-on pieces, i.e., metal barrel and engine screens, you can make a really nice version of an early Tiger.

I would like to thank Dragon Models USA for the review sample and IPMS for the opportunity to review this kit.