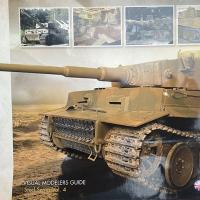 Steel Series Volume 4. A work entirely devoted to the iconic Sd.Kfz. 181 Tiger Ausf. E. Fun and easily referenced sourcebook where you can visually analyze and distinguish the main versions of the Tiger I, from the initial models to the final production variants. The introduction includes some historical notes about the design and development process of the vehicle. All of this with high-quality photographs that clearly show often overlooked external details features critical to both the King Tiger and scale modelers.

The book is broken into several sections:

While the book itself is a fantastic photojournalistic walkaround, I’m disappointed that there are no “top down” shots or interior shots. I can understand that the associated museum curators don’t want people scrambling over their pieces, particularly in Bovington. However, as the photos were for a professional book being produced by a legit, well-known company, I feel like some concession could have been made. A tall ladder would’ve easily solved the issue of taking photos of the tops. There is only one underside shot. With photo captions in English, Spanish, and French, information is kept to a minimum.

Regardless, this book makes a nice addition to a collectors’ library. I recommend it with the above caveats. My thanks and gratitude to Mig Jimenez and IPMS/USA for the review copy.