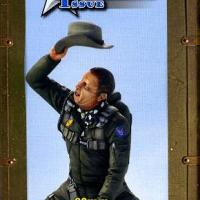 As a devotee of SciFi and the related genres, I was always a fan of Stanley Kubrick’s 1964 movie Dr. Strangelove. It had a great cast with George C. Scott, James Earl Jones, Peter Sellers and many more including the subject of this diorama, Slim Pickens as Major “King” Kong who most notably rides a nuclear bomb out of the bottom of a B-52 to detonate in Russia. I could go one more but you really need to watch is to appreciate the subtle and extensive humor thrown around.

The kit’s make is “Government Issue” and comes from our friends at Squadron. The kit comes with nine well cast resin parts, a Lucite rod and two sheets of decals. A nice (and funny) set of instructions is also included. The likeness to Mr. Pickens is good. There were no bubbles and only minimal seam lines to scrape. I built this kit as two sub assemblies: the bomb, the base and the figure. The finished kit represents the moment where Sgt. Kong is riding the nose the bomb to the ground wildly waving his cowboy hat.

Starting on the bomb was quick. The back of the bomb was sanded smooth and puttied slightly. The Lucite rod was warmed with a hair dryer and the rod bent in an “s” shape to depict the bomb at a nose down angle. The bomb, base and rod were fitted together with no issues. I did position the figure and cut a slight portion of the bomb nose for his hand to slot into when mounted. The base and the bomb were primed and then the white back of the bomb painted white. Mask and paint the main body red and then mask and paint the black nose and main base. I then gloss coated the kit and applied the very nice decals from Aeromaster. All settled well with the MicroSol/MicroSet method. There are vents back in the bomb undercuts and those were washed with black. I did follow the color instructions for the bomb with its primary color being red. A quick couple of flat coats and it was on to Slim himself.

The figure was great fitting. I used a little putty at the arm seams smoothed with lacquer thinner and it was good to go. I did pin both the head and hand carrying the hat for added strength. The skin tones were based in Reaper Miniatures Suntan Flesh and lightened with various oils. The uniform was based in Tamiya Khaki and Khaki tan. Shadows were added via water color washed and pastels. All metallic buttons, zippers, etc were done with Citadel Boltgun Metal highlighted with Mithril Silver.

The figure (sans head and hands) was gloss coated and there are decals provided for the uniform insignias. These worked well and settled nicely. A flat coat was then applied and more pastel work done to dirty things up followed by more flat coat. The tool kit was also painted at this time and the figure was finished by adding the hand and head. It was glued to the bomb and flat coated more time.

This kit is AWESOME. A great subject, excellent likeness and great casting are a grand slam in my book. I hope there are many more to follow. The only thing I would personally do different would be to paint the checkerboard on the bomb next time instead of decals.

My thanks go to Gary Newman and Squadron for a real winner. Highly recommended for everyone.

Close-up of figure riding the weapon

Back view of weapon and rider

Front view of weapon and rider
Previous Next