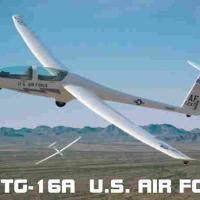 Hauler Brengun has done great work with their aftermarket sets and kits. This latest one, the TG-16A is a cool choice. In 2011, the TG-16A was chosen by the US Air Force as the new soaring trainer for USAF Academy and also is the choice for their aerobatics team. The competition version is rated at +7/-5 G which is impressive for the thinness of the actual plane.

The kit comes with a single white sprue with all the parts (and a few extra) for the plane. There is a clear sprue for the canopy and rear tail part. The wings and horizontal stabilizer are a single piece. Instructions are a single sheet and painting instructions are on the back of the box. Four sets of markings are included on the decal sheet. All as similar since the planes themselves are similar. They are white!

Construction is simple with the cockpit needing most of the parts. There are no seat belts so I added some generic ones. After the cockpit is added to the fuselage and it is closed, all that remains is to add the wings and tail. There are no locating pins, and all are but joints and make sure thing are squared true. I thought I had it but the wings have a slight sweep forward that is due to the butt joint slipping as it dried. The bottom wheels are added to five places and any clean up can start. This is a limited run kit, so some putty was needed on the fuselage seams, the wheel attachments and tail. Several rounds of sanding and priming and ready for paint. I opted for an open cockpit to these were masked.

Paint was white gloss from Tamiya sprayed in several coats for a nice smooth glossy finish. A few touch ups and decals were applied with no issues. The canopies were masked and sprayed black (based on some Internet pics) then white. I gave a plane several clear gloss coats and painted all the wheels flat black. Some of the planes I looked at had a black lip around the cockpit, so I used a marker to replicate that. I added the canopies (there are no attachment points so..) and called it done.

This is a beautiful little kit and while it takes a little effort to finish, I just love the lines of the plane and that way it looks on the shelf! Recommended

My thanks to Brengun for the opportunity to add this to my collection and get the word out about this kit.