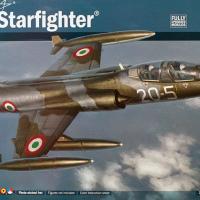 The F-104 Starfighter was a single engine, single seat fighter that was operational from the mid-1950s through 2004. The TF-104 was a two-seat training version and did not carry the fuselage mounted cannon.

Italeri’s 1/32 scale TF-104 follows their nice F-104 from a few years ago. It comes packaged in a very large, sturdy box. All the parts sprues are individually wrapped and only a couple of parts were disconnected from the sprue. The clear parts and photo-etch fret were contained on one side of the box protected by a cardboard divider. Two very large decal sheets, an instruction manual plus a separate painting and decal manual were located at the bottom of the box.

There are numerous options offered including open/closed canopies and electronics bays, two types of ejection seats, flaps and slats up or down, speed brakes open or closed, tail cone attached or separate and engine installed or displayed separately. Stands/trestles are provided for the tail cone and engine and a boarding ladder is supplied.

The parts exhibit some really nice detail. The panel lines are, for the most part, nicely engraved, however, some lines on the upper left fuselage side fade a bit near the dorsal spine. They all but disappear on the bottom edges of the inspection panels. Apparently, this was an issue on the previous F-104 kit as well.

Nearly every part needed some form of clean up, from numerous ejector pin marks in visible areas, large sprue attachments, flash, mold seams and sprue miss-alignment (Sprue E and D). Some of the big mold seams interfered with proper fit, so they could not be ignored. Taking care of these was not difficult, but added a lot of time to the build.

A comprehensive photo-etch (PE) fret contains seatbelts for two types of ejection seats, rear vision mirrors, cockpit sill plates, structural bulkheads for the rear of the fuselage and front of the tail cone and other detail parts. Some small parts were difficult to form due to the stiffness of the metal, but their inclusion was welcomed.

The two large decal sheets are fantastic with two markings for Italy, and one each for Canada, US, Germany, Netherlands, Spain and Belgium Air Forces. A full array of stencils are included. Surprisingly only one instrument dial decal is supplied. I did notice that there was no reference to using decal instruments in either manual. I was curious if this was an omission on the decal sheet, so I emailed Italeri Customer Service. I received an email back saying that the one instrument decal was to be used for reference to help the modeler only and that I could buy a “replacement” sheet? They also reminded me that no use of an instrument panel decal was shown in their instruction manuals. After a further email exchange, they kindly agreed to send me a second decal. I would suggest using either Airscale Instrument decals for “Early Jets”, or the new Eduard PE designed for the TF-104. As I had not received the second decal yet, I ended up using the Eduard cockpit and electronics bay PE that became available just as I was completing the cockpits.

Construction starts with the ejection seats and you are given a choice of Martin Baker or Lockheed seats. All except for the German aircraft use the Martin-Baker seat. The parts assemble fairly easily, and PE seatbelts are added to make a nice “bang” seat. I used the “MB” seats as I wanted to do the second Italian version.

The front and rear cockpits are then built and painted. They assemble easily with good fit and show nice and accurate detail. I deviated from the instructions and attached the rear bulkhead of the front cockpit to the front of the rear cockpit first. I found this easier to get the correct position and angle of the bulkhead. Also, seating the entire cockpit assembly in the fuselage ensures the correct alignment.

The main and nose wheel bays are assembled separately and the undercarriage (U/C) legs need to be installed at this time. They are quite strong, so there was little chance of damaging them. The nose and especially the main legs need extensive cleanup of large mold seams. The main U/C bay is completed with forward and rear walls/bulkheads and engine intake ducting, which all fit fine.

The electronics bay is a simple affair and straight from the box looks good with paint and weathering.

The wings were simple to build. Don’t forget to open the holes for the wing tank pylons. I left off the slats and flaps until the wings were attached. The left wing to fuselage fit was a little loose compared to the right wing. I glued small strips of Evergreen plastic sheet in the internal slots the wings fit into to tighten up the fit. The wing to fuselage fit was the only joints I ran Tamiya putty along. The gaps were very small, but still noticeable.

While the main assembly was left to dry, I built the four wing fuel tanks, wheels, tail and engine stands/trestles, boarding ladder, and engine.

The wheels have very nice hub detail, and the tires attempt to show tread pattern. The two outside treads are faint and the center is quite large. I attempted to scribe the two outer tread lines deeper with limited success. I substituted them with the Eduard resin wheels.

The engine only has a few parts but is impressive when built and painted. The exhaust pipe comes as two parts and looks great with accurate detail when built and painted. There are twelve massive “excess” plastic stubs (see picture) attached to the inside of the two exhaust nozzle parts. I used sprue cutters to remove each one, followed by clean up with a chisel blade and sandpaper.

The boarding ladder, tail, and engine trestles build well, following a lot of mold seam and ejector pin mark clean up. The mold seam cleanup was mainly due to sprue misalignment (Sprue E).

The clear parts look good. They are made of a softer plastic which makes them quite flexible and less prone to cracking, however flash cleanup was more difficult. Use a new, sharp blade for best results. Their sprue attachments were quite large. I used my razor saw to remove the parts, followed by delicate sanding. The five canopy parts will fit precisely together if a closed canopy version is built. I attached the windscreen and center canopy parts before painting. They fit perfectly.

I chose to build the second Italian option and painted the aircraft using Tamiya and Model Master Paints. The Eduard masking set was used to cover the canopies and lights. I cut thin strips of Tamiya tape to form the hard-edged camouflage edges.

Once painted and gloss coated, I embarked on the task of applying all the markings and stencils. The beautiful decals are made by Cartograf. To simplify the job, I cut out the decal sections that I would be using and put the rest in the box (see Picture). Most laid down into panel lines and rivets with little help, but I needed to deal with silvering under some of the clear backed stencils. I intended to use the olive drab nose cone decal but it wasn’t quite long enough, so I painted it instead. You are given the option of painting this anyway and applying separate stencils. Several other decals did not fit quite right either (see the decal picture). Some “common” stencils were for different marking options, so care is needed when using them. I discarded about 15 stencils, not including the black and orange hoist hook markings. Reference to the other marking options was needed several times. All the decals were sealed with a couple of gloss coats. Weathering and a semi-gloss coat finished the painting.

Final assembly followed with completing the canopies with air conditioning tubes, rear vision mirrors, and decals. Antennae’s, wheels, Pitot tube (this was bent in the box and straightened as best I could), fuel tanks and sensors were attached. I could not attach the tailplane to the tail without breaking off the small hinge attachment stubs as the fit was too tight (it is meant to be movable). I glued it in the neutral position. The electronics bay hatches were all displayed opened.

I found this model to be very enjoyable and, for the most part, a straightforward build. The overall engineering and fit were superb, but unfortunately let down by poor manufacturing quality control with flash, mold seams, sprue misalignment, and ejector pin. The inclusion of the PE parts is fantastic, and something I commend Italeri for including. I would recommend this kit to anyone with a few models under their belt, or used to working with PE…and a large working area!

Thank you very much to Italeri and IPMS for the privilege of building and reviewing this model.