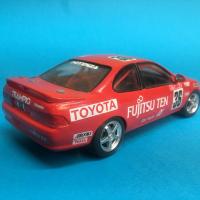 The 1992 Japanese touring car championship season was the 8th edition of the series. The series was nine events long running April thru November, Finishing up at the Fuji International Speedway in Japan. the series was run under several different regulations during it's existence. The series included international categories such as group A and Super Touring which allowed both Japanese and foreign built cars. Tom's Toyota's were competing against the likes of BMW, Honda, Nissan, Isuzu. Most were factory sponsored and a few were not. There was still some serious competition. Tom's: Tachi Oiwa Motor Sports was founded in 1974 by Nobuide Tachi ad Kiyoshi Oiwa. The pair were able to use TRD with very good results in tuning and modifications to the car and a good long term R&D program with Toyota. As a result of this they were able to go racing with fac- tory sponsorship winning championships in various categories.

Opening the box, I found there to be 58 pcs. of red, gray and clear spruce. removing them from the bags I washed them in mild dish soap. After drying them I put the clear parts in Future and set the glass aside. This is a curb side kit, meaning no engine or transmission. The only engine and transmission parts to be seen are molded into the floor pan. I started with the interior, following the paint numbers suggested on the instructions. I first painted the floor pan, then separated all the interior parts, painted and assembled them. At this point I removed all the suspension pieces, painted them and set them aside. Next was the roll cage. The roll cage cannot be installed until you finish the interior. it will go in after all of the interior is in. That's why the roll bar is done as a separate step. The holes are not open in the floor but there are dimples that I drilled out. Be careful when putting together the roll cage, line up the holes in the interior with the bottom of the roll bars. DO NOT glue them in place yet. I placed the lower pins of the roll bar in the floor and glued the upper parts together. I then removed the completed roll cage for clean up and painting.

The body needs only minimal touch sanding to remove a few blemishes. At this point I always install the mirrors, lower body panels, valance, spoilers, etc. so when I spray the body the paint is fluid from panel to panel. When the body has finished drying it is now time to paint the window trim. This can be done with a paint pen or Sharpie which is much easier than all the masking that would need to be done. I used the paint pen because the paint flowed into the crisp body lines around the windows. After the trim dried, in went the glass. The fit was spot on. Time to finish the updated suspension pieces and parts that were previously set aside. Having prepainted the parts before you assemble them you will need to scrape the points of contact to get a strong joint. At this point pay attention to the suspension because a lot will be visible through the wheels. A little extra attention to detail really helps here, such as a black wash to highlight the brake rotors and calipers which have a very fine detail and will be seen through the wheels. The final assembly went together without a problem. The call outs on the decals were easy to follow and the decals laid down without a problem. This kit was one of the most enjoyable that I have done.

I would recommend this kit.

I would like to thank Hobbico-Hasegawa for the opportunity to do this review.