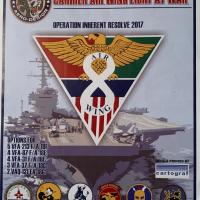 The instructions are very comprehensive and include 6 pages illustrating the markings for the different jets, three pages showing where the stencils go on each type of aircraft and two pages of load-out charts showing typical loads for each squadron’s aircraft – a very useful addition for those of us wanting to show the jets loaded up. The set does not include any stencils for anything that you may want to hang under the wings other than drop tanks and the Growler’s ALQ-99 pods. You will need to source decals for your ordinance either from your kit itself or any weapons set you use.

The instructions also show the color schemes worn by each type of aircraft. The Hornets and the Super Hornets are two tone grey (36320 top and 36375 undersurfaces) whereas the Growlers are three tone grey (36375/36320/35237). Most of the aircraft depicted have toned down squadron markings, but there are also markings for each squadron’s full color “CAG” bird. There are also markings for aircraft 404 of VFA-37 which has one vertical tail painted black with white markings and the other red with white markings. In addition, many of the jets sport impressive mission tallies on the left forward fuselage which are also provided. A nice feature is the set includes four of the numbers 0 to 9 so that you can model different Bureau Numbers other than those provided in the set, however, I wish Furball had also included a set of larger numbers so you could do different modex’s (the number assigned to the jet within the squadron/airwing).

The decals are designed so that they can be used on any manufacturer’s kit as they do not include full color tails for the aircraft that have them, just the markings, so you will need to paint the tails yourself. I am a fan of this approach as this precludes having to cut decals to fit or trying to match the decal colors with the brand of paint you prefer to use.

As I have a small pile of Hasegawa F/A-18’s and F/A-18C’s, and as a former Blacklion RIO, I just had to build one of VFA-213’s F/A-18Fs. My original thought was to model aircraft 200, but the instructions note that this aircraft was configured as a tanker for the entire deployment and I wanted to show a bombed-up jet. I ended up modeling aircraft 201 as it had a nice mission tally board.

The decals are printed by Cartograph and are commendably thin and in perfect register. As some of the stencils are grey, you may want to do a color check by painting a scrap piece of plastic or card stock and then apply a spare stencil decal to it to ensure there is enough contrast to see the stencil, I discovered too late that Testor’s 36320 is a little too light as the light grey “NO STEP” markings on the upper surfaces disappeared after application. Next time, I will find a slightly darker version of 36320. If you are building a jet with mission markings, some planning on what to apply first is required as the tally boards often overlay some of the standard stencils on the jet, so you will need to apply the stencils first and then allow them to set up and dry before decaling over them. As there are quite a few stencils to apply, dealing was spread out over several evenings.

As is to be expected with Cartograph printed decals, they snuggled down with a little Mocro Sol and Micro Set, conforming to both raised and engraved details. After decaling was complete, I washed off the excess solution and once everything was dry, I sealed the decals with Testor’s Clear Flat.

I really enjoyed this set and the different jets depicted on the decals. In fact, I now have a Hasegawa F/A-18C under construction so I can model aircraft 404 with the two different colored tails.

Furball Aero Design clearly spent a lot of time researching this set and it shows. This is a great set of decals and I hope they continue to release decals in 1/72 scale, as I have quite a stash of 1/72 kits and I am always looking for different markings or color schemes to model. For those of you looking at the photos, I apologize for having to use pictures of the decals after I removed one I needed – I recently changed phones and lost the pictures of the pristine decal sheets.

Thank you to Furball Aero Designs for the sample decals and to IPMS-USA for letting me review them.