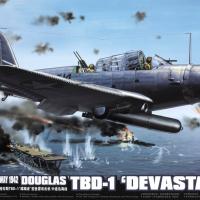 The early 1930s US Navy needed a torpedo bomber and accepted the all-new monoplane design from the Douglas aircraft company. The TBD-1 Devastator was ordered on June 30, 1934, first flying in 1935 and entering service in 1937. The Devastator was, at that point in time, possibly the most advanced aircraft flying for the USN or any navy in the world. However, the fast pace of aircraft development caught up with it and, by the time of the Japanese attack on Pearl Harbor, the TBD was already outdated. However, it performed well in some of the early battles, such as Coral Sea, where they saw extensive action. But, during the Battle of Midway, six Devastators launched on their mission against the Japanese fleet were all slaughtered save one, and they did not score any direct hits. As a result, the remaining aircraft of the type were immediately withdrawn from front line service and replaced by the TBF Avenger (also ineffective at Midway). By late 1944, almost 10 years after the original order date, no TBD Devastators were left in the US Navy inventory.

After studying the contents and making a few notes, I became aware of how this kit seemed oddly familiar. It was like I’d seen this kit before. It somehow reminded me of the Monogram kit. Having the old Monogram kit handy and 90% rescribed but never quite finished, I pulled the old kit out of the pile of shame and found that, when I compared the two kits, the parts could almost be interchanged. The part construction design and build process resemblance is uncanny, to say the least. If imitation is the sincerest form of flattery, then the original designers from the old Monogram Company should be blushingly proud. Of course, the Great Wall kit is presented in today’s higher standards, making the old Monogram kit obsolete in that regard.

Getting back on track and on to page one in the instruction book, where the cockpit and radio/gunner deck comes together. There is quite a bit of building up in this area involving some photo-etch parts. The overall level of detail is pretty good and the parts just fall together. An interesting feature of the TBD is the bomb-aiming window with bomb bay-like doors allowing the bombardier a targeting view. Great Wall spent a little extra effort in this area, with photo etch bulkheads and double-side molded clear window. The doors themselves have detailed photo-etch interior skins, so I decided to pose the doors in the open position. However, almost all the photos I’ve seen show the doors closed. In just a few hours, I soon found myself finishing up the interior on page 2. I encountered no problems so far and, after careful test fitting, I painted everything and glued up the fuselage halves.

Page 3 is one of those pages where I circle certain items I prefer to leave off until the major paint work is finished, then go back and add them later. The parts I am referring to in this case are the upper deck cockpit pieces that I would just knock off and lose before I closed them up under the canopy. Therefore, stepping ahead to assembling the horizontal tail and elevators, they are simple enough and have no fit or alignment issues. The engine builds up nicely from 8 plastic pieces and a photo-etch ignition harness. After completing the engine, I painted it and set it aside until after the major paintwork was completed. The last section the page covers is the cowl with 2 cowl flaps options and the 3-piece prop hub assembly. These were also assembled and set aside until readied for the paint shop.

Canopies and center wing section are next up on page 4. This is where some of the disappointing problems arise. Let’s start with the canopy. You have two canopies provided in the kit, a single one-piece canopy and a segmented, sectioned one or, as Great Wall calls it, “Detached,” consisting of seven pieces. The TBD had a sliding system that allowed the smaller sections to slide under the next size larger, but this did not scale down to be workable with the kit parts, making them useless for posing a fully open canopy. My solution was to take the one-piece canopy, cut it aft of the pilot’s seat, and use the windscreen and pilot’s section from the “detached” set, leaving the rest closed, hiding all the beautiful details under a crystal clear plastic green house. Another problem I found is that the canopy masks are useless. None of them fit, so I wound up using Tamiya tape and a sharp #11 to mask off the canopies. The next big disappointment came when the 3-piece center wing section went together. The fit is near perfect but there is no detail in the landing gear bays, just big empty holes just like the old Monogram kit. Hopefully someone will do an aftermarket set or you could scratch build them. Anyway, the wing section cleaned up pretty well, considering the corrugated leading edge seam, and mated perfectly to the fuselage, requiring just a little clean up and filler.

Page 5 proved to be interesting. First, I chose the flap closed position simply because of poor detail. Otherwise, the open flaps would be cool. Again, aftermarket hopefuls or scratchbuild them. The landing light – come on, GW guys, really? OK, dig through your spares box for a clear lens and modify the part or just paint the gray plastic part your favorite color of glass lens. The bomb aiming doors and fuselage are your choice, open or closed. Open is really not a practicable pose for a torpedo but, during routine ground maintenance, I’m sure someone somewhere at sometime did it. The doors themselves need little work and the photo-etch fits like a glove. The oil cooler has a photo-etch half circle mesh screen to represent the heat exchange core and it’s a good thought, but it really doesn’t come across with the right depth perspective. The landing gear is the one item they changed from the Monogram design and they missed a bit. The landing gear is molded in the unloaded position, making them long legged. In other words, the oleo is fully extended. That is fine for an in-flight or gear up model, but totally incorrect for a gear down on the deck. My correction was to remove 2/3rd of the oleo section of the gear-leg, reattach the ends and make a new brake line, pretty easy. For the wing-fold, I wanted to fold the wings for the same reason the Navy did, to save space. The end cap inserts pop right in the wings with no problems.

Flipping to page 6, we join up the outboard wing sections and add the smaller inserts, plus a few photo-etch bits. The outboard sections clean up ok. I decided to circle the pilot’s telescope and save it for later in the finishing bits. The main antenna mast and oil cap was installed.

On page 7, I tested the white metal wing fold and found them remarkable. They are nice and really support the weight, but I skipped this step until painting was finished. The next option was either bomb doors or torpedo fairing. I used the torpedo fairing and, by doing so, I discovered another large empty hole, void of any detail. This, of course, is the cavity where the tail end of the torpedo sits, making my choice of torpedo easier. The torpedo option includes two very nice versions of the famous Mk.13 torpedo – one with fancy photo-etch tailfins and blades, the other with the large clunky wooden box. Well, what else could I do? I didn’t want to look inside that empty cavity, so I used the woody. The torpedoes are not molded in the typical two halves we are accustomed to, but rather a radical end-to-end seam. Happy with everything, I painted and decaled the model. The decals went on great and laid down over the corrugated areas just fine. The mask set is not useful. Nothing on it works. The wing-walks are too short and just do not fit, the stars have rounded points and the vinyl material used is too thick to work over the corrugated sections.

The rest of the build after painting was going back and finishing the circled items.

I like it, warts and all. It has a lot of potential for the AMS crowd. The kit needs the basic upgrades, such as landing gear-bays, correct landing gear, reworking the flaps, and making a workable greenhouse canopy that could be displayed fully open. Discard the mask set.

Thanks to Great Wall Hobby and Dragon Models USA for supplying the review sample to IPMS/USA and thank you to IPMS/USA for the opportunity to review this awesome kit.